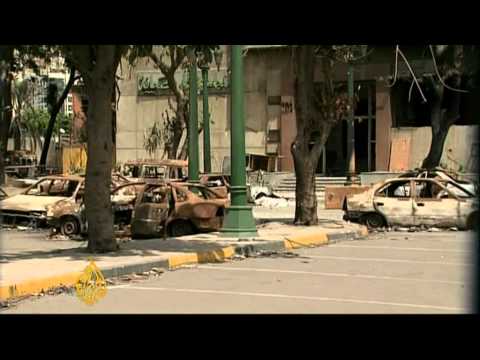 A special administrative high court in charge of ruling on Egyptian political party affairs on Saturday declared the former ruling party, the National Democratic Party, to be defunct.

For Egypt, a major opinion leader in the Arab world and a country with a fourth of all Arabs, to move to multi-party democracy is a world-historic development and likely to be influential in the rest of the region.

The venerable Egyptian newspaper Al-Ahram, which was for decades a mouthpiece of the NDP, points out that the court did not so much dissolve the party as recognize that it had been effectively dissolved by events. The ruling said that former President Hosni Mubarak had been the head of the party, and when he was overthrown by the “glorious Egyptian Revolution” on February 11, the party ceased to exist. Its property and assets were ordered confiscated by the state. Its former leaders, the Mubarak family, are in jail or under arrest.

The step was a concession by the military government to the protest movement, which had demanded both that Hosni Mubarak be put on trial and that his party be dissolved. Democracy advocates had been afraid that the NDP, with its experience in organizing for elections (though admittedly fixed ones), might dominate the parliamentary races next September. As AP notes, there was violence last weekend between army and protesters, and the military has been attempting to appease the latter while maintaining a firm grip on power ahead of the September elections.

The Egyptian protesters’ demand that the NDP be dissolved was inspired in part by the achievement of the Tunisian reform movement, which had convinced the Tunisian elite to take a similar step with regard to the Rally for Constitutional Democracy, the one-party state erected around dictator Zine El Abedin Ben Ali.

Given that the Muslim Brotherhood, the other organized party in Egypt, has pledged to limit itself to contesting only a third of seats in parliament, and given that in any case it is not being allowed by the military to run formally because it is based on religion, the dissolution of the NDP probably opens up possibilities for smaller parties to do well in the elections. Likely the result will be a patchwork quilt of small parties, who will have to cobble together a ruling coalition, as has often happened in other parliamentary systems, such as Italy’s.

The National Democratic Party run by Mubarak had been founded by his predecessor, Anwar El Sadat, in 1978 when Sadat began allowing the phony parliamentary elections after 26 years of military dictatorship. The officers who had come to power in a coup in 1952 had dissolved the former longstanding ruling party, the Wafd, which had become corrupt and represented mainly the interests of the big hacienda owners. The officers then lacked a grassroots organization that connected them to the people.

Abdel Nasser thus founded a would-be party, the Liberation Rally, which ultimately evolved into the Arab Socialist Union. That party was abolished by Sadat in 1978, since it had been strongly associated with Nasser and with, well, socialism, whereas Sadat wanted to be his own man and wanted to take Egypt to the right. He opened the country up to investment and international finance, moved close to the United States, and made peace with Israel. So the National Democratic Party was to be the tool of a turn from socialism and Arab nationalism toward Neoliberalism avant la lettre. As the succeeding Mubarak regime privatized state enterprises and became increasingly corrupt and authoritarian, it gave the NDP a worse and worse name as an assembly of corrupt Mubarak cronies. And so its three decades of success spelled its ultimate doom, just as three decades of success had doomed the big-landlord Wafd Party before it.