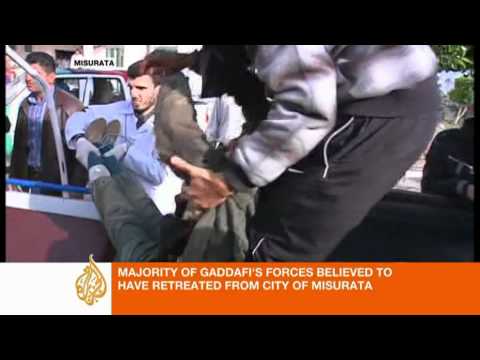 Early Monday morning, columns of Syrian tanks led the way into the southern city of Deraa (pop. 75,000), followed by infantry brigades who took cover behind them as the city was subjected to army sniper fire from several directions. I stayed up late and am watching the invasion on Aljazeera Arabic, and black smoke is a haze above the city, with artillery fire in the distance. At first I thought it was an image from Misrata in Libya. But no, it is Syria.

The Syrian army has 220,000 active troops, 11 armored divisions. and about 5,000 tanks. In March, President Bashar al-Asad had sent the 4th Armored division under command of his younger brother Maher down to Deraa. Maher al-Asad heads up both the Republican Guards and the 4th Armored Division. The Allawite sect of Shiism, to which the al-Asads belong, dominates the upper echelons of the officer corps.

But there is some evidence of a division among the Allawites, with prominent intellectuals from that sect coming out in public to protest the shooting down of unarmed protesters, and then facing arrest themselves. Likewise, the town of Jableh, with a largely Allawite population, has seen protests. Monday morning army snipers are said to have shot down 4 persons in the streets in Jableh, for no apparent reason.

The southern, Sunni city of Deraa, which has been suffering water shortages, has been an epicenter of the protests that have shaken the Baathist regime in Syria, and on Sunday thousands of its residents defied a government ban on further protests to come out into the streets to mourn protesters killed on Saturday. On Friday, the regime’s security forces are estimated to have killed as many as 90 protesters around the country. Tens of thousands of people have been regularly protesting, despite regime attempts at mollifying them, including a pro forma lifting of the emergency laws of 1963, which suspended what civil liberties there are in the constitution.

Despite the pledges of the Qaddafi government that its troops would cease attacking Misrata, they heavily bombarded the city both on Saturday and Sunday, killing at least 32 persons and wounding dozens. Free Libya forces have taken much of the downtown area along Tripoli Street, including the central hospital, the last major bastion of the Qaddafi brigades, as the latter have been pushed to the west.

Aljazeera English has a video report from Misrata later on Sunday:

The crackdown of the Sunni monarchy in Bahrain on the protest movement (which was not exclusively Shiite) has been the big failure of the Arab Spring. At least 500 people have been arrested, often in the middle of the night, and there are allegations of prisoner abuse.

The repression was aided by Saudi Arabia, and Jim Lobe argues that Riyadh is Counter-Revolution Central.

The 6 small nations of the Gulf Cooperation Council are hard to see as a center for counter-revolution in any simplistic way, despite being small, wealthy hydrocarbon states with conservative populations. Qatar has been a cheerleader of the Arab Spring, having had bad relations with dictator Hosni Mubarak in Egypt, and with Muammar Qaddafi in Libya. The GCC spearheaded the Arab League call for a no-fly zone over Libya. Kuwait just offered over $100 million to the rebels in Libya. The GCC has tried to negotiate a path for Ali Abdullah Saleh to step down in Yemen.

But in Bahrain, the Saudis and the GCC more generally have played a sinister role in instigating and backing an uncompromising crushing of the largely Shiite activists, especially those in the Wifaq and al-Haqq Parties, which left 24 dead. The regime has committed numerous human rights violations in the course of the smackdown.

Although the Sunni monarchy accuses the Bahrain Shiites of being a cat’s paw of Iran or Lebanon’s Hizballah, Bahraini Shiites (about 60 percent of the citizen population) are Arabs and most have their own, conservative Akhbari school of Shiism that downplays the role of ayatollahs. They were seeking more rights within a Bahrain context, and the major pro-reform party, Wifaq, wanted a constitutional monarchy. Most Bahrainis reject the Iranian notion of theocratic rule by clerics.

But rather than compromise with the majority of their citizens, the Bahraini royals chose to crack down hard and attempt to destroy the reform movement.

The US has offered mild criticism of the repression, thereby deeply angering Saudi Arabia, but Washington’s hands appear to be tied by its need for the naval base it leases from Bahrain at Manama for the 5th Fleet, and its need for the good will of Saudi Arabia, the world’s swing oil producer, which has an outsized impact on world petroleum prices. The Saudis have been pumping less petroleum for the past month, which has contributed to the price rise, and it may be deliberate on their parts. If so, Riyadh is having an impact on the 2012 presidential race.

Egypt and Tunisia are so far the only big successes of the Arab Spring, though there is positive movement in Yemen and Morocco. Elsewhere, the loyalty of the officers of the armored divisions may make the difference.