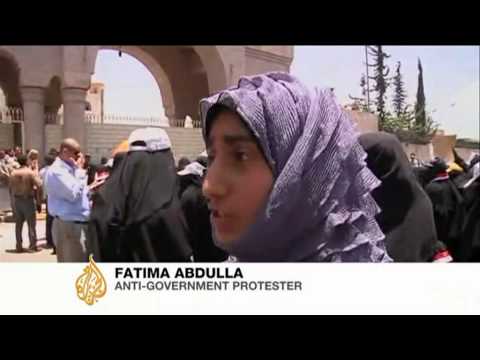 Thousands of Yemeni women demonstrated against President Ali Abdullah Saleh on Saturday in Sanaa and Taizz, saying “We will not be silent!” They were protesting his complaint on Friday that there was gender mixing in the public rallies, which he said was contrary to Muslim culture, and his call for them to remain home. The activist women charged him with impugning their honor by suggesting that they were behaving inappropriately in public, and some filed a libel suit against him. Others just came out with extra fervor for the demonstrations.

The women protesters tend to wear the niqab, or the sort of full face covering recently banned in France, and they march together, so that they are in fact observing the norms for women coming in public in conservative Arabian societies. Only hard line fundamentalists advocate women’s seclusion, i.e. staying home most of the time, and Saleh had never been in that camp.

It is ironic that Saleh should try to send the women home, since his relatively secular Arab nationalist regime had lukewarmly adopted a project that my colleague Deniz Kandiyoti at SOAS in London has called “state feminism.” (See also Margot Badran). This developmentalist vision involves improving women’s literacy, education, and employment opportunities on the grounds that they are a resource for the state as it brings its people into modernity. Under Saleh’s government, which has devoted less practical energy and funding to state feminism than lip service, there nevertheless have been substantial improvements in women’s literacy— even though girls’ enrollment in school in rural areas is still low. ( 81% of young Yemeni women have an an elementary school education or less, while only 17% have a high school degree.) Of course, the People’s Democratic Republic of Yemen, in the south (1967-1990), the Arab world’s only Communist regime during the Cold War, was a much more vigorous proponent of state feminism, though the project mainly affected the cosmopolitan port city of Aden, and it collapsed with unification in the 1990s, when the more conservative ways of the north were imposed on the south.

Saleh’s attempt to shoo the women back home was an uncharacteristic appeal to Muslim fundamentalist rhetoric, and perhaps an attempt to sow divisions between the fundamentalists and the women and their centrist or secularist supporters. It is an illustration of how secular Muslim leaders have often appealed to Islam in a cynical and instrumentalist way when it has suited them. (It is also a further illustration of the limitations of state feminism, which is, despite its rhetoric, patronizing and patriarchal.)

Aljazeera English has video on the women’s protests: