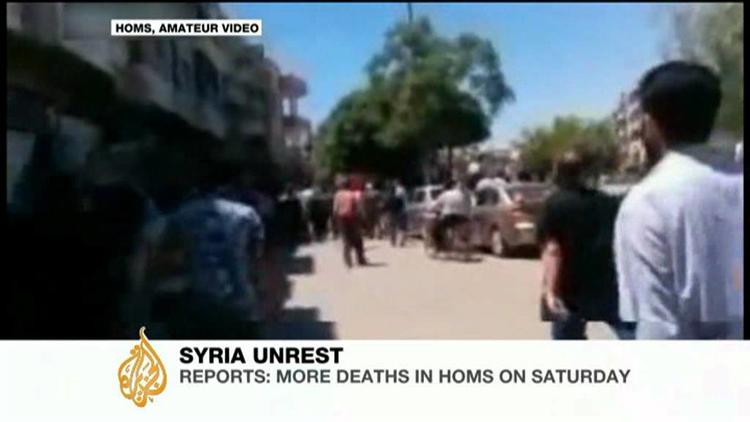 Syrian security forces opened fire again on Saturday, killing 11 protesters in the central city of Homs. The protest began as a funeral procession for demonstrators killed on Friday, when 10 died in Homs and some 44 died at government hands throughout the country. In Homs on Saturday, an AFP reporter and eyewitness said that tens of thousands were in the streets.

Despite a heavy government crackdown in past weeks and hundreds of deaths, the protests in Syria appear to be spreading. On Friday, they broke out in the Kurdish city of Qamishli, in Banias and Latakia to the west, in Deir al-Zor (a small petroleum-producing area) and in Damascus suburbs.

Aljazeera English reports on Saturday’s protests and killings in Homs:

The USG Open Source Center translates the comments of Syrian-Kurdish human rights activists in Al-Sharq al-Awsat: “…Report from Arbil by Shirzad Shaykhani: Demonstrations in the Kurdish Areas Under the Banner of ‘No Dialogue With Those Who Committed Mass Massacres…’ Al-Sharq al-Awsat Online, Saturday, May 21, 2011, OSC Translated Text.

‘ Hirvin Awsi, member of the Relations Bureau at the Syrian Kurdish Future Trend, who conveyed what happened in the Kurdish cities yesterday, said in a telephone call with Al-Sharq al-Awsat, that “large demonstrations have been organized by the Kurdish youths in coordination with the youths of Syria in the other cities such as Hims, Latakia, and Damascus under the banner of “Azadi Friday,” which means freedom, in a show of solidarity among the various Syrian components and as an expression of their ongoing protests against the current regime, during which the demonstrators shouted slogans that are different from the previous ones, which say “No Dialogue with the tank, and no dialogue with those who committed mass massacres.”

The security authorities have prepared two days ago to interfere and repress the demonstrations. The security presence yesterday was extraordinarily very extensive, but no confrontations have taken place between the demonstrators and the Syrian security services, which encircled the Kurdish demonstrations that engulfed most Kurdish areas, such as Al-Qamishli, Amuda, Al-Darabisah, Ras al-Ayn, Kubani, and others.

Awsi said that “the Syrian regime has fully lost its credibility, and the demonstrations that took place yesterday showed that the security authorities do not even respect the president’s decisions which were made a few days ago to stop the killings of demonstrators. However, what is going on now is that people are killed in various areas in which demonstrations took place after these decisions.”

She added: “This in itself is evidence that the security services do not respect even the decisions made by the regime’s head, something which confirms to us that this regime is based, in the first place, on repression and killing and that the state has a repressive nature. Therefore, it is impossible to reach an understanding with it on introducing reforms or to force it to change its behaviors and ensure the basic rights of its people.” ‘