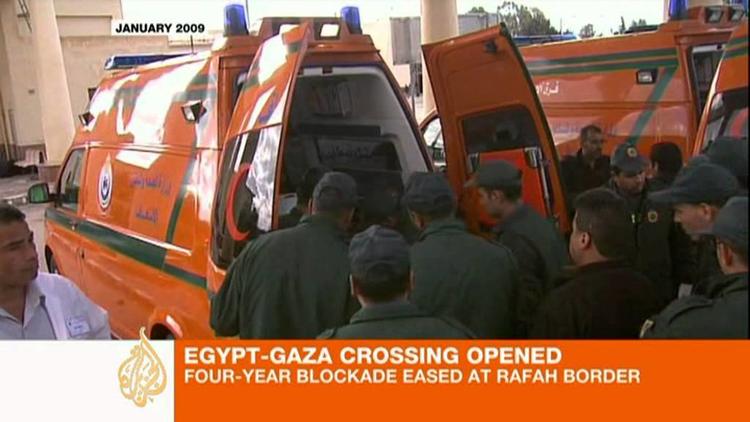 The new, transitional Egyptian government formed in the wake of a popular revolt took a step on Saturday toward lifting the Israeli-induced blockade of the civilian population of Gaza. Egypt, at Israeli insistence, is still blocking import of needed material such as concrete, necessary to rebuilding the 1/8 of homes destroyed by the Israelis in their illegal attack on Gaza in 2008-2009, which disregarded the welfare of noncombatants and sometimes actively targeted the latter, according to the UN Goldstone Report.

But Egypt is now allowing the circulation outside the Strip of certain categories of Palestinians (40% of whose families were chased out of their homes in what became Israel in 1948 and who often still live in refugee camps). The whole of the population has been kept in a kind of big jail by the Israelis for the past 4 years, as collective punishment in the Israeli struggle with the Hamas organization. The overthrown Hosni Mubarak regime had completely cooperated with Israeli policy toward the Palestinians, in ways that might be explained by personal corruption at high levels, even though Egyptian popular opinion opposed it.

Even the usually neutral International Committee of the Red Cross lambasted the Israeli blockade of Gaza last year as a clear breach of international law.

‘ In fact, the blockade is not the problem but is rather a symptom of the underlying issue, which is Palestinian statelessness. Gazans have no state. What the Israelis deign to call the ‘Hamas regime’ is no such thing because it lacks sovereignty, over its borders, air, sea, imports and exports. (The idea that Israel is ‘at war’ with its own occupied territory is laughable.) The Israeli ‘withdrawal’ of 2005 simply removed a few thousand colonists and withdrew troops, usually, to the borders. But it did not allow the creation of a sovereign state. Gazans are excluded from a third of their own farmland by Israeli restrictions on where people can live. That so many Gazans are unemployed, that their industries have collapsed, that they are food insecure, and that malnutrition is causing stunting in 10% of children– all these outrages derive from their lack of a sovereign state to look out for their interests […] Nevertheless, the problems inflicted on Gazans by the Israeli blockade will not be resolved by a loosening of the blockade. They will only be resolved by the bestowal of citizenship on Gazans, either by a Palestinian state (which does not exist and would have to be created) or by Israel (which does not want the Gazans as citizens but may end up being stuck with them). ‘

Aljazeera English has video on the Rafah border opening:

Aljazeera also reports on the conclusion by the Palestinian leadership that the Netanyahu government is not in the least interested in pursuing peace negotiations: