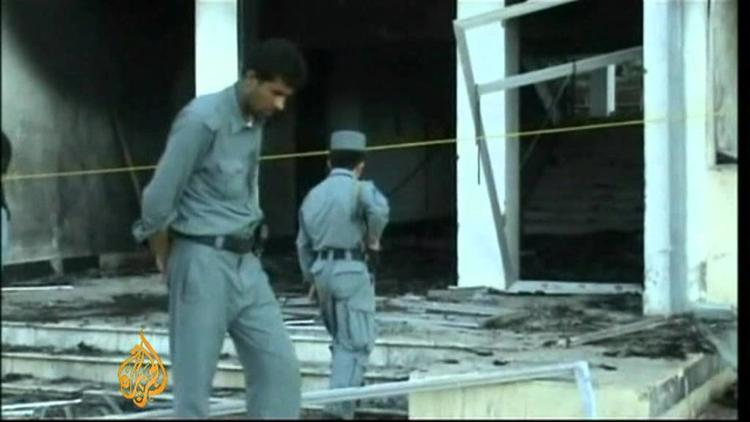 Memorial Day, in my view, should be a time of reflection not only on the sacrifices made for the nation in war but on whether our wars are necessary and whether they are being fought in the right way.

The Iraqi people and the parliament want the US out of Iraq, and the US public wants out, and that withdrawal should proceed as outlined in the SOFA (i.e. US out by the end of the year). The Iraqi military is such that Baghdad will likely muddle through without the Pentagon. Moreover, trying to keep US troops in a country where they are widely disliked can only cause a lot of trouble. There are no US troops in Libya and US air involvement is limited in favor of NATO- and Arab League- UN allies. It in any case is likely to be a limited engagement. The place where there are over 100,000 US troops doing war-fighting on a large scale and over many years is Afghanistan, which for some reason gets less press and less public interest than Libya.

The protests in Lashkar Gah, Helmand Province, Afghanistan, against yet another alleged killing of 14 women and children in an airstrike that went awry, reminds us that the big counter-insurgency effort in that country still has not produced social peace, still has not yielded a government capable of taking over security duties. NATO has had to issue an apology. If Afghan police and soldiers could project authority and force in local areas, air strikes would be unnecessary. And after nearly 10 years since the overthrow of the Taliban, it is legitimate to ask when and how exactly local troops can be expected to take up this slack?

The deadly Taliban suicide bombing in the north of the country, which killed the police chief, a German officer, and NATO troops, raises questions about the Karzai government’s preparedness:

But those who are skittish about a proposed US withdrawal in 2014, saying it is too soon, have to tell us when exactly it won’t be too soon. It is the Afghans’ country; when will they be willing and able to fight for it?

The US public is tired of forever wars, and the idea that massive counter-insurgency is necessary to fight al-Qaeda has been belied by the success of a small, focused counter-terrorism operation against Usama Bin Laden.

On this Memorial Day, it is time to start thinking about how to get out of Afghanistan, where the US has no vital interest, where there are no resources to speak of, where the international will to stay on the part of NATO allies is collapsing, and where the Karzai government has been erratic and corrupt. Regional powers have an interest in it not becoming terrorism central again, and the US has shown it can strike smart and on a micro-level. Hundreds of thousands of troops and decades of nation-building are the wrong way to go on this one.