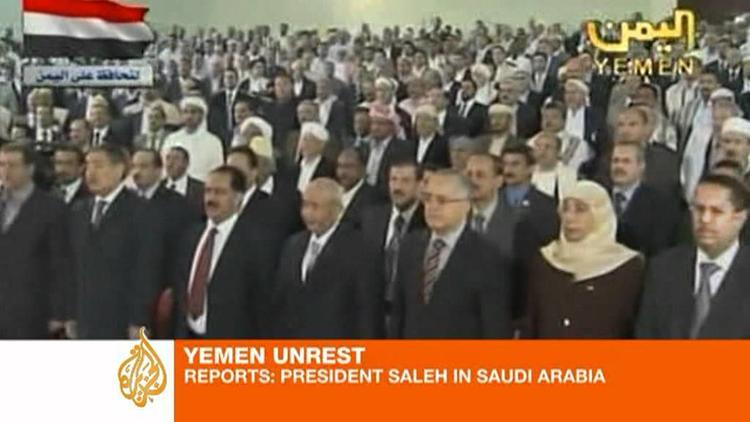 Aljazeera Arabic is reporting that later in the day Sunday, clashes between armed groups of pro-Saleh and anti-Saleh gunmen broke out in the capital, where the situation is “unstable,” after Yemeni President Ali Abdullah Saleh flew to Saudi Arabia for medical treatment late Saturday.

The Yemeni press says that most shops in the capital were closed out of fear of insecurity and lack of electricity. Gold and silver shops had hidden their merchandise, and where they opened (not only in Sanaa but also in some other cities), their shelves were empty and they were only taking orders. Used car dealerships also appear to have warehoused their cars, and their lots are empty.

Some small crowds of joyous protesters had braved the otherwise deserted streets of Sanaa and other cities on Sunday morning. The protesters, most from the youth movement that has spearheaded the attempt to overthrow Saleh’s regime, chanted “Liberty, liberty, this is the festival of liberty!” and “A New Yemen!” and “The Regime has fallen!”

Yemen is the poorest of 22 Arab League states, and sits astride the mouth of the Red Sea, through which about ten percent of world trade flows. Its port of Aden is also important to Arabian Sea trade. Yemeni instability that spilled over onto neighboring Saudi Arabia could have a significant impact on petroleum prices. A small al-Qaeda cell operates in Yemen, and Muslim radicals are said to have taken advantage of the instability to take control of the small city of Zinjibar, where 10 Yemeni troops were killed on Sunday.

Saleh had been wounded by shrapnel on Friday in a rocket attack on the mosque in his presidential palace where he was praying. Several of Saleh’s officials, including the prime minister, have also fled to Saudi Arabia.

Initial reports had claimed that Saleh’s wounds were light. Aljazeera points out that if they were in fact been light, he could have been treated in Saleh; his flight to Saudi Arabia must in that case have been political rather than medical. If the wounds were more serious than admitted, forcing him genuinely to seek the better facilities in Riyadh, then likely he would take some time to recuperate. (Some reports speak of burns to his face and chest). Since Yemen cannot afford to be without a leader in these tumultuous times, likely Saleh will be replaced before he can return.

In order to avoid being seen to take sides, the Saudis also offered medical treatment to injured members of the opposition al-Ahmar clan.

Saleh left his vice president, Abd-Rabbu Mansour Hadi, in charge, and the latter met with the US ambassador and top Yemeni military officials late Saturday. The regime maintains that Saleh will return in a few days, but many Yemenis are convinced that his rule is now over. If Saleh does not return within 60 days, according to the constitution, there must be new elections.

Hadi’s grip on power is likely insecure, and rebel forces are speaking of setting up a transitional council that would presumably include the ten-tribe coalition of Islah Party leader Sheikh Sadiq al-Ahmar, who emerged in the past two months as Saleh’s major rival.

In the major southwestern city of Taizz, an armed group attacked the local presidential palace. The guerrillas organized themselves, they say, to avenge the deliberate killing of protesters by Saleh’s security forces. Some reports say 4 were killed in Taizz fighting on Sunday.

In the major southern port city of Aden, security forces withdrew from checkpoints.