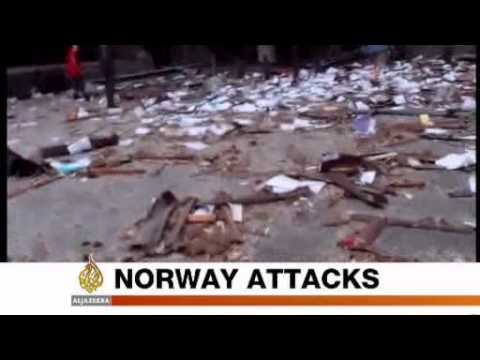 That the horrible terrorist attacks in Oslo on Friday that left some 90 persons or more dead– a bombing of the prime minister’s office and shootings at a Labor Party youth camp– were allegedly committed by a blonde, far right wing Norwegian fundamentalist Christian rather than by a radical Muslim group is being treated as a matter of surprise in some quarters. But if those journalists and analysts had been paying attention, they would not be surprised at all.

And in fact, kudos to Foreign Minister Jonas Gahr Store (a Labor Party member), who refused to speculate about who was behind the attacks before some evidence was gathered: “We’ve seen in Europe in recent years that politicians have been jumping to conclusions about suspects before investigations have been conducted, and we will not commit that error.” Give that man a medal!

Europol reports have long made it clear that the biggest threat of terrorism in Europe comes from separatist movements, then from the fringe left, then from the far right. In 2008, only one terrorist attack out of hundreds in Europe was committed by radical Muslims. In 2010, according to Europol [pdf], 7 persons were killed in terrorist attacks. Some 160 of these attacks that year were carried out by separatists. The number launched by people of Muslim heritage? 3. It would be silly to maintain that Muslim radicals do not pose a threat of terrorism; indeed, many plots were broken up by European police. But as an actually-existing phenomenon, terrorism in Europe is mainly the work of Christian-heritage people. For more on the Norwegian far right, see Firstpost.com.

Bill Maher and other public figures often say that while few Muslims are terrorists, terrorists are disproportionately Muslim. But this way of putting the matter is extremely misleading.

The suspect, Anders Behring Breivik, is anti-multiculturalist and believes that the Qur’an commands Muslims to be extremists. His attack on the Labour Party appears to have derived in part from its insufficient hate of people of other cultures. Breivik’s discourse, about Islam and the Qur’an being *essentially* evil, is part of the Islamophobia promoted by some right wing forces in the west; and his actions show where that kind of thinking can lead. I wrote in 2006:

“The hatemongers are well known. Rupert Murdoch’s Fox Cable News, Rush Limbaugh’s radio program and its many clones, telebimbos like Ann Coulter, Evangelical leaders like Franklin Graham, Congressmen like Tom Tancredo, and a slew of far rightwing Zionists who would vote for Netanyahu (or Kach) if they lived in Israel– Frank Gaffney, Daniel Pipes, Michael Rubin, David Horowitz, etc., etc.”

As anyone who studies the Old South in the US will tell you, turning some people into exemplars of the N-word requires that you punish in various ways the N-lovers.

Foreign Minister Store said it well (h/t CNN), defending liberty of belief and association against the Far Right attacks on them:

‘ “Today, free government was attacked, freedom of association was attacked, the spirit of youth was attacked. But we will kick back and say that these are values that are dear to us, and we intend to defend them and Norway will be recognizable tomorrow as the Norway our friends and partners around the world have known so far.”

Aljazeera English has a video report on the attacks:

The proponents of racial profiling who want to target some Orientalist imagination of the Muslim are extremely dangerous to our security, since they want to let European separatists, far leftists, and neo-Nazis off the hook while targeting Muslims, who commit little terrorism in Europe.

Today’s events remind us that we cannot profile evil and that terrorists come in all sizes, heritages, shapes and skin colors.