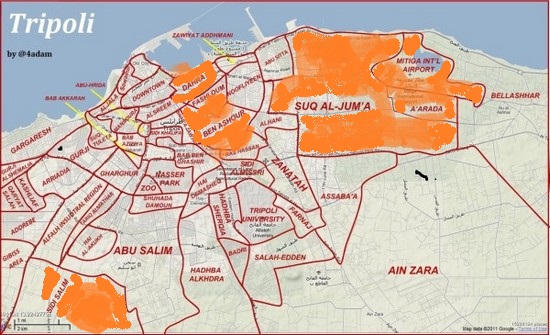 As dawn broke Sunday in Libya, revolutionaries were telling Aljazeera Arabic that much of the capital was being taken over by supporters of the February 17 Youth revolt. Some areas, such as the suburb of Tajoura to the east and districts in the eastrn part of the city such as Suq al-Juma, Arada, the Mitiga airport, Ben Ashour, Fashloum, and Dahra, were in whole or in part under the control of the revolutionaries.

Those who were expecting a long, hard slog of fighters from the Western Mountain region and from Misrata toward the capital over-estimated dictator Muammar Qaddafi’s popularity in his own capital, and did not reckon with the severe shortages of ammunition and fuel afflicting his demoralized security forces, whether the regular army or mercenaries. Nor did they take into account the steady NATO attrition of his armor and other heavy weapons.

This development, with the capital creating its own nationalist mythos of revolutionary participation, is the very best thing that could have happened. Instead of being liberated (and somewhat subjected) from the outside by Berber or Cyrenaican revolutionaries, Tripoli enters the Second Republic with its own uprising to its name, as a full equal able to gain seats on the Transitional National Council once the Qaddafis and their henchmen are out of the way. There will be no East/West divide. My hopes for a government of national unity as the last phase of the revolution before parliamentary elections now seem more plausible than ever. Tellingly, Tunisia and Egypt both recognized the TNC as Libya’s legitimate government through the night, as the Tripoli uprising unfolded. Regional powers can see the new Libya being born.

The underground network of revolutionaries in the capital, who had been violently repressed by Qaddafi’s security forces last March, appear to have planned the uprising on hearing of the fall of Zawiya and Zlitan. It is Ramadan, so people in Tripoli are fasting during the day, breaking their fast at sunset. Immediately after they ate their meal, the callers to prayer or muezzins mounted the minarets of the mosques and began calling out, “Allahu Akbar,” (God is most Great), as a signal to begin the uprising. (Intrestingly, this tactic is similar to that used by the Green movement for democracy in Iran in 2009).

Working class districts in the east were the first to rise up. Apparently revolutionaries have been smuggling in weapons to the capital and finding a way to practice with them. Tajoura, a few kilometers from Tripoli to the east, mounted a successful attack on the Qaddafi forces in the working class suburb, driving them off. At one point the government troops fired rockets at the protesting crowds, killing 122 persons. But it was a futile piece of barbarity, followed by complete defeat of Qaddafi forces. Eyewitness Asil al-Tajuri told Aljazeera Arabic by telephone that the revolutionaries in Tajoura captured 6 government troops, and that they freed 500 prisoners from the Hamidiya penitentiary. The Tajoura popular forces also captured the Muitiqa military base in the suburb and stormed the residence of Mansur Daw, the head of security forces in Tripoli.

The revolt in the eastern working-class district of Suq al-Juma appears to have begun before the others, on Saturday. All through Saturday Qaddafi security forces attempted to put it down, but they failed and in the end had to flee.

Qaddafi released an audio address in which he made his usual fantasy-land observations, said real Libyans liked to kiss pictures of his head, and called the revolutionaries rats and agents of imperial France. It was an incoherent, rambling, disgraceful performance, and was likely among the last such.

At one point an Aljazeera Arabic correspondent was able to get the frequency of the security forces and we overheard them fretting that they were running low on ammunition and fuel for their riposte to the revolutionaries’ advance.

For a map of the fighting, see here.

By 8 am Sunday morning Libya time, fighters from Nalut and elsewhere in the Western Mountain region had begun coming into Tripoli to give aid to the people who made the uprising. The revolutionaries’ advance into the capital is entitled “Operation Mermaid Dawn.”

One way or another, it seems clear that the Libyan Revolution has entered its last phase, and that this phase could well end abruptly in the next days. If Qaddafi’s own capital is so eager to be rid of him, his support is much thinner than many observers had assumed. His troops in Zawiya and elsewhere are increasingly refusing to engage in hand to hand combat, running away when the revolutionaries show up, and at most sitting in a truck and bombarding the revolutionaries from a distance (but thereby making themselves targets of NATO war planes and helicopters). The esprit de corps of the revolutionaries is, in contrast, high.