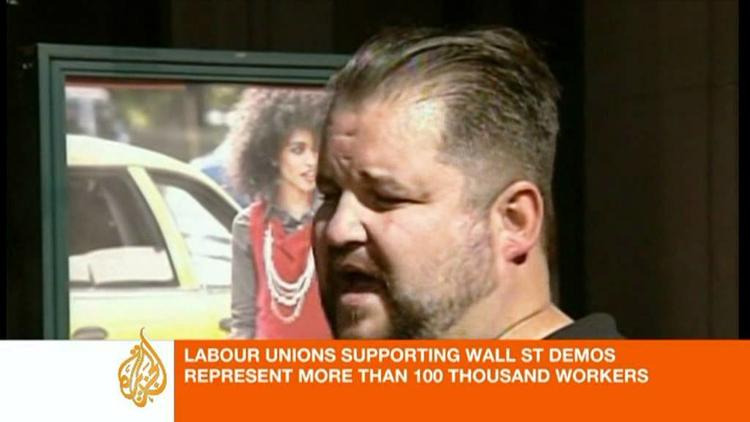 The Occupy Wall Street protests spread Thursday to Washington, D.C., Los Angeles and Philadelphia, though these rallies were relatively small compared to the estimated 20,000 who came out in New York on Wednesday.

Aljazeera English reports on the Thursday protests, in which some protesters tried to breach the steel barriers police have erected around Wall Street’s skyscrapers– essentially creating a “no free speech” zone in the penumbra of Capital:

Surprise! Corporate mass media is hostile to the movement. So let us look at what the Web is saying about it.

The big numbers in New York were a result of the union support the movement is attracting, which suggest that it is neither a flash in the pan nor inconsequential.

The grassroots movement and the unions, of course, have to work out the terms of their cooperation. Some union organizers are annoyed that they got out 100,000 protesters last year in Washington, D.C. and were blacked out completely by corporate media, but the OccupyWallStreet.org supporters are being reported on.

But the Occupy Wall Street people were also largely ignored until the police attacked them, and until some of them closed down the Brooklyn Bridge. It may be that unions are too well-behaved to make a media splash nowadays.

Also, only 11.7 percent of US workers are unionized, a 70-year low, which may have given the reporters the notion that this is a declining and increasingly unimportant movement. Its downfall began when Ronald Reagan signaled that employers could fire union organizers without fear of Department of Justice retaliation. Walmart and other big corporations routinely just fire workers for trying to make a union, and this authoritarian behavior by corporations has been accepted by American society. Often these corporations use tricks like hiring employees for fewer than full-time hours, so as to avoid having to pay health insurance. Since Walmart, e.g., made its way importing Chinese-made goods into small town America, goods produced in a Communist system where unions are also prohibited or tightly controlled, the entire Neoliberal project worked against worker rights from both sides of the Pacific.

In the contest between multi-billion-dollar corporations with operations on several continents, and some poor little group of small town employees, the corporations win every time if the employees can’t even organize to challenge corporate policies. And American workers are flat on their backs, and vulnerable to a stomping, with millions thrown out of their jobs altogether and the rest kept on a short leash.

Jonathan Alter considers the potential impact of the OWS movement:

1. It might make Mitt Romney a posterboy of hated banks if he is the Republican presidential candidate in the general election

2. It could mobilize people to vote who otherwise might not have (though Alter notes that Republican state legislatures have been trying to make it more difficult to vote for youth and non-drivers– most of whom would be Democrats)

At Tomdispatch.com, Andy Kroll outlines the reasons for the outrage sparking these protests— centered on the “lost decade” of the Bush era, during which everyone got poorer except the very rich:

3. The US now counts “more than 46 million men, women, and children among this country’s poor. In other words, 15.1% of all Americans are now living in officially defined poverty, the most since 1993”

4. African-Americans and Latinos were hit especially hard, with their middle classes virtually wiped out, as many homeowners lost their most important asset:

“Between 2005 and 2009, the household wealth of a typical black family dropped off a cliff, plunging by a whopping 53%; for a typical Hispanic family, it was even worse, at 66%. For white middle-class households, losses on average totaled “only” 16%.”

5. “the top 1% of earners enjoyed 65% of all income growth in America for much of the decade”

It could make a person angry.

John Lake at Blogcritics looks more closely at Alexa Obrien of @USDaysofRage and the principles she put forward for her Days of Rage campaign, aimed at securing

1. Non-Violence
2. Principles before Party — US Day of Rage will never endorse, finance, or lend our name to any candidate or party
3. Volunteer — Every US Day of Rage organizational committee on the state, city, and federal level should be entirely self-supporting, declining outside contributions from any political party, association, or candidate. US Day of Rage is not a money making operation. We are volunteers.
4. Autonomous Except in Matters Affecting the Whole — We do not support, for example, violations to our principle of non-violence. USDayofRage.org is here to help facilitate city and state level organization, and to organize the federal protest at the US Capitol.”