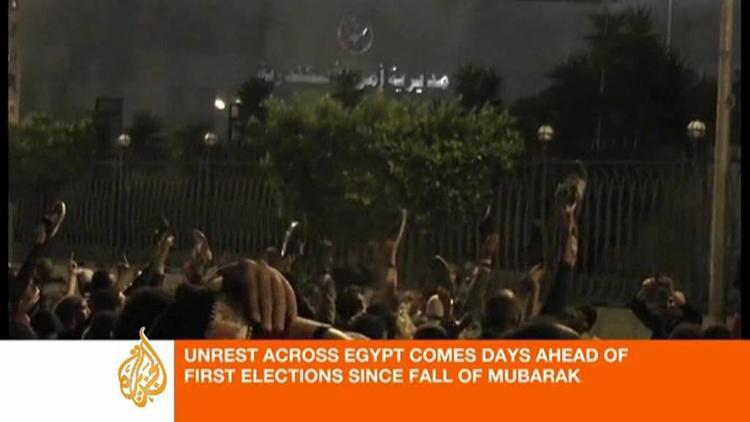 1. Egypt’s security police and other forces are alleged to have killed 13 persons and wounded hundreds more at Tahrir Square in downtown Cairo as they systematically cleared it of protesters. The protesters were demanding that the military step down in favor of civilian government. The interim government of PM Essam Sharaf and the Supreme Council of the Armed Forces (SCAF) affirmed that despite the turmoil, elections for the lower house of parliament would begin November 28 as planned.

2. In Syria, two rockets slammed into Baath Party buildings in Damascus on Sunday, the first time the embryonic guerrilla resistance has hit inside the capital. . Security forces killed at least 9 protesters on Sunday, in Homs and points north. Meanwhile, the Arab League stuck to its guns with regard to its plan to send 500 observers to Syria. The Baath government complained that the plan as it stood would infringe against Syrian sovereignty. The Arab League deadline has passed for the Syrian government to cease shooting down its people, and some AL states have threatened economic sanctions. Syria has been suspended as a voting member of the Arab League.

3. Libyan fighters arrested feared former intelligence chief Abdullah Sanoussi near Sabha on Sunday. The capture came a day after Saif al-Islam Qaddafi was apprehended. Sanoussi is under indictment at the International Criminal Court for war crimes against the Libyan people, and has also been convicted in absentia of terrorism in France. Sanoussi was Muammar Qaddafi’s enforcer and is allegedly implicated in many killings.

The new Libya appears increasingly safe from any rearguard rebellion led by former regime figures, as all the significant ones are now in exile, in custody, or dead.

4. In Yemen, dictator Ali Abdullah Saleh seemed set to back out once again from talks on a transition from his rule. Saleh made it clear that if he did ever step down, he would hand over power to the Yemeni miltiary.

In the meantime, protests and clashes continue in Yemen. On Saturday, 400 more government troops defected to the demonstrators in Sanaa.

5. Update The Tunisian al-Nahda Party is denying the following report. If it is true that the Bahrain news agency is now just making things up about the stance of foreign observers, it signals a new low in disinformation for the island kingdom:

In a shameful piece of sectarianism, the al-Nahda Party in Tunisia, which gained a plurality of the seats in the new parliament in recent elections, was reported [to its subsequent denial] to be taking the side of the Sunni monarchy in Bahrain against the largely Shiite protesters. Al-Nahda is a Sunni fundamentalist party that has benefited from the Tunisian revolution, waged mostly by secular forces last January. [If the Bahrain report is true,] It is disappointing that it would allow its judgement to be affected by fellow feeling with the island nation’s Sunni monarchy.