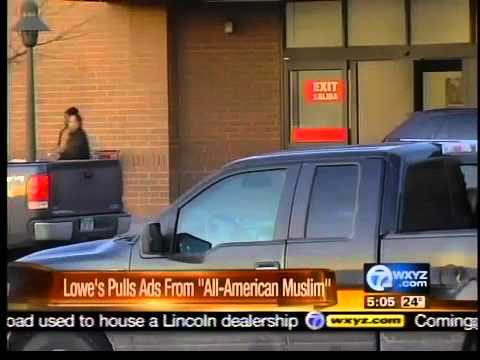 Lowes should be ashamed of itself for bowing to hate speech. Well, there is always Home Depot.

Detroit’s Channel 7 has a video report from Dearborn, Michigan:

The grounds on which the Florida Family Association, a far right wing hate group, ordered Lowe’s to drop its advertising on TLC’s “All-American Muslim,” were reminiscent of the rantings of Norwegian mass murderer Anders Breivik.

Here is a trailer of the show on the TLC cable network:

An FFA representative came on CNN and asserted that the show neglected to emphasize the Muslim duty to wage jihad or holy war.

This would be like complaining that a reality show about Roman Catholics neglected to spend enough time on the papal bull of Pope Eugene III, “Quantum praedecessores,” which called for the second Crusade.

And, since FFA is fundamentalist believers in the Bible, maybe secular people should be afraid of them. After all, The Book of Joshua 1:18 says of people who don’t accept Yahweh, “Whosoever he be that doth rebel against thy commandment, and will not hearken unto thy words in all that thou commandest him, he shall be put to death: only be strong and of a good courage.” Academic studies of the two scriptures have found that the Bible is more violent than the Qur’an.

Seriously, it is not as if most Muslims wake up in the morning thinking about holy war. In fact, I suspect that FFA is engaging in mirroring, and projecting onto ordinary Muslims its own violent impulses toward gays and religious minorities.

Christian fundamentalists and Muslim-haters misread the verses of the Qur’an that command Muslims to defend themselves from the pagan Kafirs or infidels of Mecca. The pagan Meccan elite declared war on the early Muslims and tried to wipe them and their religion out. The Muslims were simply defending themselves, hence the order in the Qur’an to fight back.

But “infidels” in, say, the Chapter of the Spoils (Surat al-Anfal), refers strictly to the pagan would-be murderers.

Christians are never called simply “kafir” or “infidel” in the Quran, but rather the Muslim holy book says that they are “closest in love” to the Muslims.

Fundamentalist Christians who hate Muslims read the command to fight back against attacking Meccan pagans as a command to murder all non-Muslims. That is not what the text says, and is contrary to Islamic law. Christians are recognized as belonging to a true religion (“In the Gospel there is guidance and light”). They are granted security of life and property. Only a fringe of radical extremists such as al-Qaeda would agree with the scripture interpretation of the Florida Family Association.

And, again, the niceties of Islamic law are not even on the minds of most young Americans of Muslim extraction. And those for whom it does matter are most often highly ethical persons.