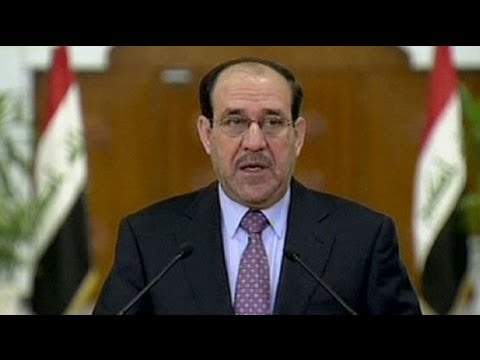 Is Iran a consideration in Shiite Prime Minister Nouri al-Maliki of Iraq’s attempt to purge high Sunni Arab officals from his government?

Al-Maliki has his own reasons for what he is doing. But it is possible that he is being pressured by Iran to do something about some Iraqi politicians.

The Iranian press, for instance, is convinced that one reason al-Maliki is trying to fire his vice premiere, Salih al-Mutlak, is that al-Mutlak supports the Mojahedin-e Khalq (MEK or MKO), an Islamic-Marxist political cult with several thousand members at a camp in Iran Iraq. Al-Maliki says he is determined to see the MEK out of Iraq. Saddam Hussein gave the base to the MEK and used them for espionage and terrorism against Iran. Al-Maliki originally insisted that the MEK depart by the first of the year, but has accepted a UN request to delay the expulsion until April. One problem is finding countries that will accept the MEK members, given that they are on terrorist watch lists, including that of the US State Department. But the European Union’s removal of the group from its terrorist list may help the relocation.

The Iraqi National Party or Iraqiya received some 80% of Sunni Arab votes in 2010, and most of its members of parliament and high officials support allowing the MEK Camp Ashraf to remain in Iraq.

Regarding Tariq al-Hashimi, one of two vice presidents, now under an arrest warrant, it is worth noting that he is strongly supporting the Syrian opposition and opposes al-Maliki’s recent backing of Syria’s Bashar al-Assad. Iran deeply depends on al-Assad for its Middle East policy and as a conduit of aid to Hizbullah in southern Lebanon.

On Wednesday, al-Maliki called upon Kurdistan authorities to turn al-Hashimi over to Iraq, in accordance with a warrant issued for his arrest.

Hashemi and Mutlak on Wednesday warned that al-Maliki’s recent moves against them could lead Sunni Arabs to secede from Iraq.