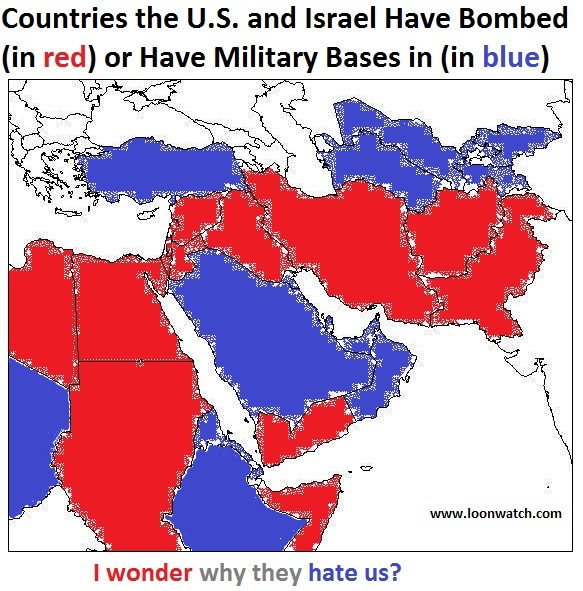 From Loonwatch: “This “three-decade war for domination of the Middle East” becomes apparent when we consider how many Muslim countries the peace-loving United States and her “stalwart ally” Israel have bombed.”

(I generally agree, but there are a couple of problems here, see below)

[I may be having a senior moment, but I actually don’t think the US has bombed Iran. It shot down an Iranian civilian air liner in 1988 and has backed the Mojahedin-e Khalq (MEK) or People’s Jihadis to blow things up in Iran. It also gave tactical support to Saddam Hussein’s military in the Iran-Iraq War of 1980-1988, and so bombed Iran by proxy. But I can’t remember any direct US military strike on the country.

(Ooops. Yes, a senior moment. The US bombed an offshore Iranian oil platform in 1988, and I think that would count. h/t to Shannon in comments!)

Also, the US has had no base in Uzbekistan since 2005. I also questioned Turkmenistan but found this.

Finally, there is a logical fallacy because having a US base in a country is the result of a bilateral agreement and it isn’t always unpopular, even at the level of the person on the street. In the Cold War, Turks were very happy to have the US presence to deter the Soviets.

Still, that there are a lot of resentments because of knee-jerk US backing (since the late 1960s) for Israeli hawks and because of the way the US and its ally have sought hegemony in the region, so the mapmaker has a point.]