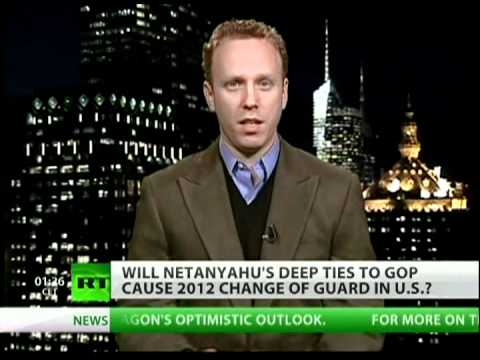 As an American, I’m deeply relieved that Gov. Rick Perry of Texas is highly unlikely to be president of the United States. As a blogger who occasionally enjoys a bit of satire, I have to say it is a real shame. Sometimes I spend an hour or so scouring for what news I want to blog about. All you’d have to do is just follow this guy around and report whatever came out of his mouth and it would be endlessly entertaining (at least until he provoked someone to rain down nuclear missiles on us just to shut him up).

For the blogger-satirist, the good news is that the rest of the Republican carnival talks nearly as crazily about foreign policy, with the exception of Ron Paul, as Perry. They all want to go to war on Iran, put US troops back into Iraq, and abdicate on Palestine to right wing Israeli policies. Incidentally, Perry’s hatchet job on Mitt Romney resembles that of the Neoconservatives on Paul (see also this article.

Here was the gem of last night’s debate at Myrtle Beach, sponsored by Fox Cable News and Wall Street Journal (i.e. by Rupert Murdoch, who doesn’t deserve more respect than Donald Trump but has nevertheless managed to get it despite his unhealthy interest in the messages on your home phone).

So here was the leading question that set Rick Perry off:

BAIR: Governor Perry, since the Islamist-oriented party took over in Turkey, the murder rate of women has increased 1,400 percent there. Press freedom has declined to the level of Russia. The prime minister of Turkey has embraced Hamas and Turkey has threatened military force against both Israel and Cypress. Given Turkey’s turn, do you believe Turkey still belongs in NATO?

[Dear Fox News: A cypress is a kind of tree. The Mediterranean island you are looking for is Cyprus.]

Bair’s charges against Prime Minister Tayyip Erdogan of the Justice and Development Party in Turkey are mostly pure propaganda. Things like the murder rate of women don’t change in accordance with which party is in power! Turkey has not threatened military force against Israel– rather the Israeli military attacked a civilian Turkish aid ship in international waters in an act of piracy and killed 9 people including an American citizen, to which Turkey replied with a demand for an apology. Erdogan has urged a secular constitution on Egypt and has not “embraced” Hamas in the sense of agreeing with its fundamentalist ideology. He has simply declared that Israel’s policy of placing the whole civilian population of the Gaza Strip under severe embargo is illegal and immoral, and he has encouraged aid volunteers to get civilian supplies to Gaza’s children. (Fox Cable News and some of the Republican candidates feel about Palestinians pretty much the way Nazis felt about Jews before the Holocaust– i.e. that it was better that they be stripped of citizenship and kept stateless and downtrodden).

The only thing Bair got right is the point on press freedom. Turkey has jailed over two dozen journalists in the past year, which is very worrisome. I’m not sure, however, that the situation of journalists in Turkey is worse than in Putin’s Russia. Indeed, my impression is that there is substantially more press and political freedom in Turkey than in the Russian Federation at the moment. ( @JosephFCrater pointed out on Twitter that two dozen journalists have been arrested this fall by American mayors like New York’s Michael Bloomberg for covering Occupy Wall Street).

So then the would-be tippler-in-chief delivered himself of his informed response:

PERRY: Well, obviously when you have a country that is being ruled by, what many would perceive to be Islamic terrorists, when you start seeing that type of activity against their own citizens, then yes. Not only is it time for us to have a conversation about whether or not they belong to be in NATO, but it’s time for the United States, when we look at their foreign aid, to go to zero with it.
(APPLAUSE)

The Justice and Development Party (AKP) is not even fundamentalist, much less terrorist. Its members want a multicultural Turkey that makes it possible for observant Muslims to be full members of the nation and play public roles. Compared to Rick Perry’s Dominionist wing of Christian fundamentalism which resembles Khomeinism in wanting a religious theocracy, Erdogan’s AKP is positively Voltairean!

It hasn’t committed terrorism against Turkish citizens, as Perry weirdly implies. It has acted as a parliamentary party.

Turkey has peace-keeping troops serving alongside US ones in Afghanistan, and in danger of being killed by Taliban, and it is a profound insult to reward their friendship with the US by this kind of trash talk. Turkey responded to President Obama’s troop escalation in Afghanistan by more than doubling the size of its contingent, and it has an important troop training effort for the Afghanistan National Army.

Turkey has been targeted by al-Qaeda-linked groups.

Ironically, the United States, by invading Iraq and dissolving the Iraqi army, turned the north of that country into a safe harbor for Kurdish guerrillas of the Kurdish Workers’ Party (PKK), designated by the US as a terrorist organization. Some 5000 PKK fighters were based in US-occupied Iraq, and on the American watch, they sneaked across the border to kill dozens of Turkish troops (which is to say, NATO troops) and to commit acts of terrorism in Turkish cities. By the rules of the George W. Bush administration, US-occupied Iraq was harboring terrorists and could have been held accountable by Turkey. (Turkey would be better off if it gave more rights to its Kurdish citizens and moved toward ethnic as well as religious multiculturalism, and the Turkish military has a lot to answer for from the dirty war against the Kurds in the 1980s and 1990s. But the PKK has often behaved despicably and surely is the terrorist in the story at this moment.)

Undeterred by his complete ignorance, Perry continued flapping his lips:

PERRY: And you go to zero with foreign aid for all of those countries. And it doesn’t make any difference who they are. You go to zero with that foreign aid and then you have the conversation about, do they have America’s best interest in mind? And when you have countries like Turkey that are moving far away from the country that I lived in back in the 1970′s as a pilot in the United States Air Force that was our ally, that worked with us, but today we don’t see that. Our — our — our president, has a foreign policy that makes our allies very nervous and emboldens our enemies. And we have to have a president of the United States that clearly sends the message, whether it’s to Israel, our friend and there should be no space between the United States and Israel, period.
(APPLAUSE)

PERRY: And we need to send a powerful message to countries like Iran, and Syria and Turkey that the United States is serious and that we’re going to have to be dealt with.

Governor Perry might want to notice that there are many differences between Turkey and Iran. For instance, look at this pdf report on Turkish-US military cooperation and see if that sounds like Iran to you. Turkey still hosts that Incirlik Airbase where the young Rick Perry says he was stationed but where he apparently did not bother to learn anything about his host country. If anything, US-Turkish military relations are on an upswing.

As for Israel, it is an informal US ally and has often been helpful, but it isn’t bound by treaty to fight to protect the US from forces that attack it. In contrast, Turkey as part of NATO is under Article Five of the NATO treaty, which says that an attack on one is an attack on all. Turkey fought with the US in Korea, and is helping out with peacekeeping and training in Afghanistan. Which war was it that Israel fought alongside US troops?

Ironically, Perry is doing what he accuses Obama of– making an ally nervous and uncertain. Whereas Obama hasn’t done that, at all.