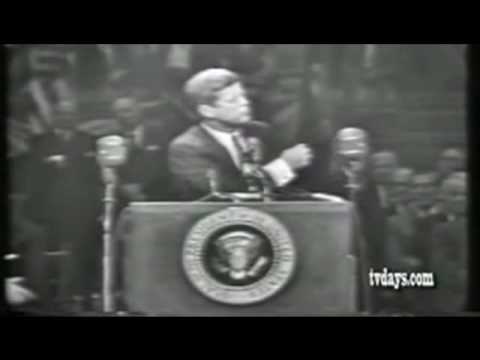 Rick Santorum said Monday that when he first heard John F. Kennedy’s speech on religion and politics, it made him want to puke. Santorum misrepresented what Kennedy said, of course. Kennedy welcomed the participation of religious people in American public life. Santorum is a secret dominionist, desiring a takeover of the US by rightwing religion, which is why he really objects to Kennedy’s statement. (Santorum is deeply under the influence of the scary Opus Dei cult.) But Santorum’s attack on President Kennedy started me thinking about the differences between these two Americans who put themselves forward as leaders of this country.

10. John F. Kennedy was a war hero who fought in the Pacific theater after America was the victim of a war of aggression.

Santorum is a chickenhawk who voted to send US soldiers into Iraq on false pretenses.

8. John F. Kennedy was a liberal who cared about people:

“If by a “Liberal” they mean someone who looks ahead and not behind, someone who welcomes new ideas without rigid reactions, someone who cares about the welfare of the people — their health, their housing, their schools, their jobs, their civil rights, and their civil liberties — someone who believes we can break through the stalemate and suspicions that grip us in our policies abroad, if that is what they mean by a “Liberal,” then I’m proud to say I’m a “Liberal.” — Acceptance of the New York Liberal Party nomination (14 September 1960)

Rick Santorum is a rightist radical who wants to abolish the Federal safety net for those who need it and who plays politics with race resentments.

“I don’t want to make black people’s lives better by giving them somebody else’s money; I want to give them the opportunity to go out and earn the money.”

7. John F. Kennedy was committed to protecting the environment:

“I look forward to an America which will not be afraid of grace and beauty, which will protect the beauty of our natural environment, which will preserve the great old American houses and squares and parks of our national past, and which will build handsome and balanced cities for our future.”

Rick Santorum argues for human “dominion” over the earth, more oil and gas use, and dismisses the threat of global climate change.

6. John F. Kennedy launched a US government project to land an American on the moon within a decade, saying “We choose to go to the moon in this decade and do the other things, not because they are easy, but because they are hard, because that goal will serve to organize and measure the best of our energies and skills…”

Santorum, no visionary, views space exploration as a “wasteful” “government program” and wants to hang competition with the Chinese in space on the US private sector (as if there is money to be made in the black vacuum of outer space)

5. John F. Kennedy praised science and scientists, saying, , “Science contributes to our culture in many ways, as a creative intellectual activity in its own right, as the light which has served to illuminate man’s place in the universe, and as the source of understanding of man’s own nature.”

Rick Santorum believes that most scientists are immoral.

“The very word “secrecy” is repugnant in a free and open society; and we are as a people inherently and historically opposed to secret societies, to secret oaths and to secret proceedings. We decided long ago that the dangers of excessive and unwarranted concealment of pertinent facts far outweighed the dangers which are cited to justify it. Even today, there is little value in opposing the threat of a closed society by imitating its arbitrary restrictions. Even today, there is little value in insuring the survival of our nation if our traditions do not survive with it. And there is very grave danger that an announced need for increased security will be seized upon by those anxious to expand its meaning to the very limits of official censorship and concealment. That I do not intend to permit to the extent that it is in my control.”

2. John F. Kennedy opposed wars of aggression, saying, “The United States, as the world knows, will never start a war. We do not want a war. We do not now expect a war. This generation of Americans has already had enough — more than enough — of war and hate and oppression.”