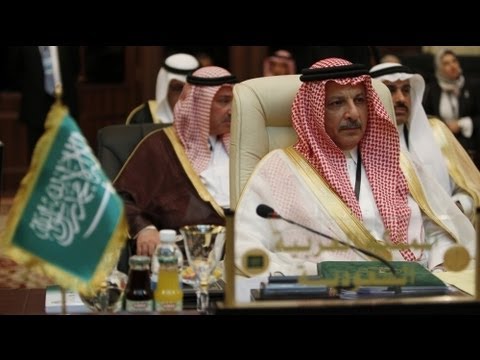 The Arab League is meeting in Baghdad for the first time in 22 years, in the absence of long-time fixtures such as Zein El Abidin Ben Ali of Tunisia, Hosni Mubarak of Egypt, Muammar Qaddafi of Libya, and Ali Abdullah Saleh of Yemen– all overthrown by the popular uprisings of 2011-12. Of the remaining two countries where there has been a substantial revolutionary movement, Syria has been suspended from Arab League membership, so that Syrian president Bashar al-Assad will be discussed only in his absence. But Bahrain’s Sunni monarchy has succeeded in remaining diplomatically viable despite its crackdown on its own protesting crowds. In part, Bahrain is being treated differently because many Arab leaders code the Shiite protesters there as an Iranian fifth column.

Syria is among the most pressing items on the docket, and is an issue that has already divided and in some ways defeated the meeting. Saudi Arabia and Qatar wanted a resolution calling for al-Assad to step down in Syria and for arming the Syrian revolutionaries. Failing that, they wanted to invite members of the rebel parties to attend in Baghdad. Iraq rejected all these proposals. As a result, Qatar and Saudi Arabia, along with about half of the attending countries, are only sending ambassadors, not foreign ministers– a snub at Iraqi Prime Minister Nouri al-Maliki.

In the meantime, military operations continued in Syria, with regime troops storming Qalat al-Mandiq in Hama province. Some 40 persons are estimated to have been killed there in recent days.

The Arabic press is reporting leaks that the League will reject foreign military intervention in Syria, but will back Kofi Annan’s UN plan. It is also being rumored that the al-Maliki government is attempting to deflect a harder line on Syria by threatening to bring up as an agenda item the treatment of religious and ethnic minorities in the Arab world. (For North Africa the discussion would concern Berbers, for Egypt Coptic Christians, for Saudi Arabia Shiite Muslims, etc.). Iraq is among the more multi-cultural of the Arabic-speaking states, with its Shiite majority and its large Kurdish minority, and so is in a position to lead a charge on the issue of minorities, one that would be extremely unwelcome to Sunni Arab-majority states. The problems of minorities are not irrelevant to the Syria crisis, since the religious minorities there are fearful of the secular Baath government being overturned by one dominated by Sunni Muslim fundamentalists. These fears are shared by al-Maliki’s Shiite-dominated government in Iraq.

Euronews has a video report on the Arab League’s support for the United Nations plan for Syria, involving a call for a ceasefire and negotiations.

Since Syria has already verbally pledged to observe the UN plan (though there is no sign it is doing so), the Arab League adoption of the UN plan for Syria is not very forceful nor does it contain anything new. The Syrian regime is accused of killing thousands of protesters over the past year.