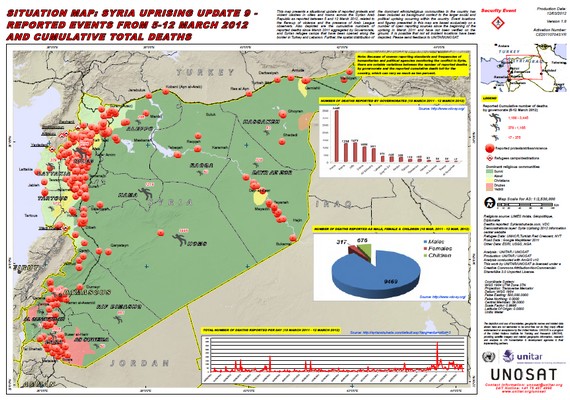 The Syrian uprising is a year old, and France 24 has a collage of videos chronicling these dramatic and bloody events.

The world community has failed Syria, just as it failed Rwanda and the Congo, though the human toll in Syria is a fraction of those killed in the African events. Russia and China have used their veto to block any effective United Nations Security Council resolution that might lead to regime change. India has also, unlike the Arab League, opposed any call for President Bashar al-Assad, the Butcher of Homs, to step down.

Those on the left and in the libertarian movement who stridently condemned Arab League and NATO intervention in Libya (which forestalled massacres like the one we just saw in the Baba Amr district of Homs) have been silent about al-Assad’s predations and clueless as to what to do practically. Perhaps they do not care if indigenous dictators massacre indigenous protesters, as long as there is no *gasp* international intervention.

The Baath one-party police state, dominated at the top by the minority Allawite Shiite sect, has deployed armor and artillery to bombard city quarters without regard to civilian casualties. Thousands of innocent civilians are dead at regime hands. Some 200,000 Syrians have had to flee their homes. While defectors from the military have formed a Free Syrian Army that has attacked and ambushed the regular army, these attacks have formed a minor part of the violence. Likewise, bombings by “al-Qaeda,” Sunni Muslim radicals, have been few and far between. Mostly, the violence has stemmed from government troops sniping at peaceful protesters. The protests have often been big, and they have been persistent, but they have predominated in medium-sized and smaller cities away from the capital of Damascus. They are unable by themselves to cause the regime to fall.

Many of the protests are economic, not ideological. In much of rural Syria, a persistent drought has deprived farmers and urban food distributors of enough water. The Baath Party, which back in the 1970s was very good at dams and irrigation works, has been unable to get the water flowing, either because the drought is too severe or because the party has become corrupt and inefficient. Likewise in many of the protesting cities, there are many fairly recent labor migrants from the countryside, whose hopes for urban jobs have been disappointed by the world economic crisis since 2008. Many of the demonstrations have been in working class districts of central cities, suffering most from high unemployment. To dismiss these civilian crowds of workers and farmers as “Salafis” and “al-Qaeda” is bad social science and just regime propaganda.

Much of the protest is also for basic human values like dignity. It is no fun to live in a police state, where you are monitored and can be arrested and tortured at will. Some of the impetus for the Syrian rebellion comes from this demand for basic dignity. The regime has promised reforms, including allowing other parties to run for office and a lighter hand by the secret police. But few analysts believe that the Baath Party will voluntarily share power or change its brutal ways.

US intelligence analysts believe that the uprising is unlikely to dislodge al-Assad any time soon. Syria has an army of some 330,000, with its upper echelons heavily Allawite and loyal to the regime. It has about 5,000 tanks.

The one plausible scenario is that the constant demonstrations inflict such damage on the economy that the business and middle classes in Damascus and Aleppo finally turn on al-Assad and force him out with big demonstrations in the capital. These classes, a mix of secular Sunni Muslims, Allawites, Christians and other minorities, however, are so far more afraid of what might come next than of persisting instability with the secular Baath Party at the helm. Many Syrians watched Iraq’s descent into civil war and long term instability after George W. Bush overthrew the Baath there, and don’t want a repeat in Syria.

Meanwhile, outsiders have been reduced to applying some ineffectual economic sanctions to top officials and speaking vaguely about delivering aid to the brutalized population.

Because of gridlock at the UN Security Council, and because of regional splits, the Syrian people are likely on their own. They began their uprising, they will have to finish it. Iran, Lebanon (especially Hizbullah) and Iraq are helping the Syrian regime. Turkey, Saudi Arabia, Qatar and Jordan (and now Hamas) want al-Assad to step down. The regional powers balance and check one another, just as the global ones do.

The Israeli elite seems divided on whether it is better to keep the Baath or risk a new, perhaps Muslim Brotherhood government. Foreign Minister Avigdor Lieberman has been agitating for forceful intervention to overthrow the Baath Party, and has reached out to the Syrian National Council, which wants to supplant al-Assad. But it is hard to discern much follow-through or enthusiasm in other quarters of Israeli politics.

The Syrian crisis has divided the anti-Israeli rejectionist front. Sunni Hamas, representing most Palestinians of the Gaza Strip, has sided with the Sunni Muslim parties of the revolutionary states of Tunisia, Libya and Egypt (who support the Syrian uprising), departing Damascus and abandoning Syria’s Baath elite. The Shiite Hizbullah of south Lebanon, in contrast, has strongly supported al-Assad and is patrolling the Lebanon border with Syria to keep any help from going to Damascus.

This UN map gives a sense of the situation in Syria:

It is described this way at the UN site:

“This map presents a situational update of reported protests and violent clashes in cities and towns across the Syrian Arab Republic as reported between 4 and 12March 2012, related to the flare-up of violence and the presence of Arab League observers. Also depicted are the cumulative numbers of reported deaths since March 2011 aggregated by Governorate, and Syrian refugee camps that have been opened along the border in Turkey and Lebanon. Further, the spatial distribution of the dominant ethnic/religious communities in the country has been included as background context to the larger social and political uprising occurring within the country.”