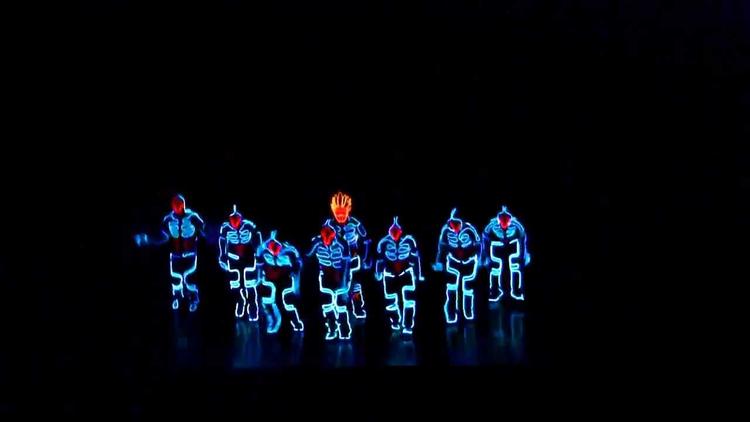 Japan’s Wrecking Crew Orchestra performs an innovative light dance in uniforms like those in the classic science fiction movie Tron. I see the performance as a celebration of science and technology, of the contemporary moment, and a rejection of the dead hand of tradition; and I therefore read it as highly political (see below). This version is better quality than the one that went viral, showing the colors of the costumes better.

Since Tron is being taken as the inspiration here, it is worth recalling that the iconic costumes were designed by Jean “Moebius” Giraud, an epic French cartoonist, who also did storyboards for the film. His style influenced the French electronic-music duo Daft Punk, who went on to do the score for Tron Legacy.

Giraud was also a major influence on Japanese Manga comic book art. Tron costumes and Manga have some of the same design roots, making it natural that the Wrecking Crew Orchestra appropriated this style (and perhaps they were influenced a bit by Daft Punk, as well).

This French-American-Japanese hybridity of hypermodern style reflects the universality of science fictional themes. In Moebius, Manga, Tron and this dance, contemporary bodies refigure themselves under the impact of rapid technological change, blinking in and out of existence and surprising us with their spatial instability. The shock of our changing relationship to our bodies caused by modernity has produced this year’s culture wars over contraception, abortion, evolution and health care, as the Right wing pushes back against the future, attempting to re-anchor especially women’s bodies in ancient scripture and a constructed “nature” thought to pre-date and take priority over scientific instruments. In contrast, the visual tradition to which the Wrecking Crew Orchestra here appeals celebrates the evolving cyborg character of the body and underlines its agility. (This cyborg theme is also apparent in the Moebius- and Manga- themed Daft Punk music video, “Harder, Better, Faster,”, best known in the US via the Kanye West remix– the music video of which, however, visually subverted the optimism of the original with darker, Japanese-dystopian themes.)

On Moebius’s role in Tron design:

“In early 1981, Steven Lisberger assembled an illustrious team of artists to finalize the designs for “Tron.” This team included Jean “Moebius” Giraud, Syd Mead and Peter Lloyd. Moebius, a French comic book artist known for his work in the magazine “Heavy Metal,” contributed costume designs and storyboard art. The designs of the vehicles and computer environments fell to futuristic industrial and film designer Syd Mead. Commercial airbrush artist Peter Lloyd designed environments and backgrounds, in addition to serving as a color stylist.”