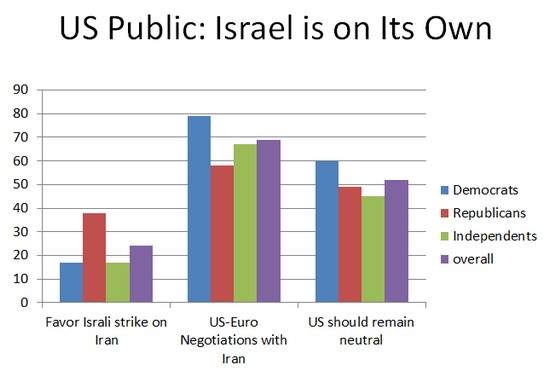 A new poll shows that the US public, showing a broad consensus across parties, wants the Iran nuclear enrichment issue dealt with through negotiations. They even want to entrust the issue to the UN security council. They think that the US should discourage Israel from attacking Iran. They are convinced that an attack would be a disaster and lead to a long-term conflict. And they hold that if Israel goes it alone and does strike Iran, the United States should remain neutral.

All of these attitudes are the diametrical opposite of those held in the US Congress.

Only 24% of Americans said Israel should strike Iran. 69% want the US and Europe to pursue negotiations with Iran instead.

Some 71% of respondents want the US to discourage Israel from attacking Iran, including a majority of Republicans.

74% want the US to work through the UN Security Council to resolve the conflict with Iran! And fully 69% of Republicans concur.

A slight majority, 52%, want the US to remain neutral if Israel were to attack Iran. Some 60% of Democrats feel this way, while Republicans and independents are fairly evenly divided. But only 25% would want to see the US support Israel militarily in case a war breaks out.

This poll, if it is accurate, shows the resistance of the US public to the barrage of propaganda they have faced on the Iran nuclear issue. They don’t want a war, they don’t want the Likud Party initiating one, and they don’t want to get involved if Netanyahu goes off the reservation.

For more on the ways that the Israeli right wing has attempted to manipulate US public opinion on the Iran issue, see Richard Silverstein’s revelations.