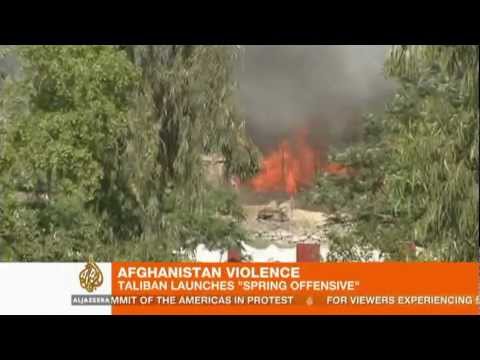 The Taliban kicked off their spring offensive with numerous coordinated attacks in the capital of Kabul and well as in some provinces.

This sort of tactic makes a lot of noise, but typically has no practical benefit for a guerrilla movement. The Sunni Arab Islamic State of Iraq has been blowing up Baghdad regularly but we’ve seen no sign of it interfering with the consolidation of power by PM Nouri al-Maliki. Perhaps it has even backfired and created momentum for al-Maliki.

One local Afghan newspaper was left puzzling as to the purpose of these attacks, which, like those in Baghdad, likely have not hope of tactical success. The article speculates that the Taliban are trying to keep the US boots on the ground, just as President Hamid Karzai is, so as to extract strategic rent from the ongoing Western presence in Afghanistan. That is, some allege that the attacks in Kabul were motivated by a desire to draw the US into a longer-term occupation, so that the Taliban can be assured of having someone to fight. (Seems unlikely to me, but interesting that it appeared in the Afghan press. And, I don’t think it would work. Most Americans, even Republicans, want out, and I think most US troops will be out by 2014…)

The USG Open Source Center translated an article from Pashto in the Islamic press about the attacks:

Kabul, 15 April: Ministry of Interior: 17 militants have been killed in Sunday’s attacks.

The Afghan Ministry of Interior in their latest statement on Sunday, 15 April, said that 17 militants have been killed in today’s attacks and two others have been arrested.

The statement, which AIP received late in the evening, says that the militants targeted three areas in Kabul city in which four militants have been killed.

The statement further adds that 11 police soldiers and five civilians have sustained injures in this incident.

The Ministry of Interior has not confirmed any other casualties except for the killing of the terrorists only.

The statement also adds that four other terrorists have been gunned down in shoot-out between the militants and security guards of PRT in Jalalabad and also adds that three people have been killed as a result of a car explosion.

According to the statement, a terrorist who tried to flee the area was detained by the security forces.

The Ministry of Interior confirms the injury of four civilians in Jalalabad incident.

The statement also says that three assailants have been killed in Sunday’s attack that took place in Gardez city capital of Paktia Province and adds that three policemen and five civilians have been wounded in this attack.

The statement also reported about another incident in Logar Province in which three attackers were killed in Pol-e Alam area of the Province and adds that another terrorist have been arrested. The statement also confirms the injury of only three policemen in this incident.

Although the Ministry of Interior did not report killing of any one from the security forces, Zabihollah Mojahed, the Taleban spokesman, claims killing tens of policemen, army soldiers and a number of foreigners in today’s attacks. Afghan Islamic Press (AIP) has not received any confirmation from independent sources.

(Description of Source: Peshawar Afghan Islamic Press in Pashto — Peshawar-based agency, staffed by Afghans, that describes itself as an independent “news agency” but whose history and reporting pattern reveal a perceptible pro-Taliban bias; the AIP’s founder-director, Mohammad Yaqub Sharafat, has long been associated with a mujahidin faction that merged with the Taliban’s “Islamic Emirate” led by Mullah Omar; subscription required to access content; http://www.afghanislamicpress. com)