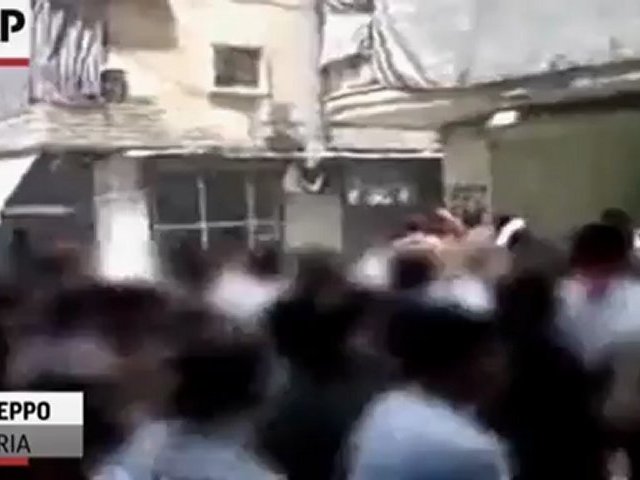 The largest demonstrations held in Syria’s second city, Aleppo, since the beginning over a year ago of the revolutionary movement in that country, were held on Friday. In part, they were provoked by the brutality of regime troops toward student protesters at the university in Aleppo on Thursday. The Baathist regime of President Bashar al-Assad responded with tear gas and batons, and there were some injuries reported. Tens of thousands of people came out in the streets in other cities as well on Friday in a continued effort to topple the regime.

Aleppo is a city of about 2 million (roughly the size of Houston) in a country of about 22 million, and is the most populous urban area (the capital, Damascus, has slightly fewer people but is obviously more politically important). About 12 percent of the population of Aleppo is Christian, and it has Kurds among its Sunni Muslims.

Because the Syrian Christians had been fearful of Muslim extremists coming to power if al-Assad were overthrown, they haven’t been active in the revolt for the most part. (Some of the Christians there are refugees from Iraq, who have horror stories of what happens to Christians when a secular ruling party like the Baath is overthrown, and they have helped induce caution in their coreligionists in Syria and Lebanon). And many Sunni business families in Aleppo, of a secular bent, had the same fears.

But if the regime is going to send uniformed thugs onto the college campus and rough up their children, the Aleppines can be provoked. And they were, on Friday.

If Aleppo continues to turn against the regime, it is a perhaps fatal blow to the Baath. Eventually Damascus itself is likely to be radicalized, and once the capital turns on its government, it is hard for the President to avoid being put on a helicopter. That development still does require that the officer corps split or remain neutral, which is difficult in Syria because the president’s brother, Maher al-Assad, commands the tank corps. A coup against Maher by a combination of reformist Allawite junior officers and Sunni colleagues would probably be necessary to achieve that result. (The upper echelons of the Baath civilian and military elite is disproportionately drawn from the Allawite Shiite majority, about 10% of the Syrian population).

The Syria crisis is on the NATO agenda for its Chicago meeting this weekend, as is the Iran crisis. Russia warned the West against any military intervention in Syria or Iran. Russia is backing the Baath regime, which buys Russian weaponry and leases to Moscow a naval base on the Mediterranean at Tartous.

This huge demonstration in Aleppo shows that the strategy of the urban protesters in Syria, of simply being tenacious and non-violent, has a real chance of success, because as the regime represses more and more people, it provokes bigger and bigger crowds all over the country. The minority who have taken up arms and the fringe that has set off bombs have been far, far less successful politically. In fact, the Free Syrian Army, made up of defectors with weapons, which has tried to assert control in some city districts throughout the country, has just provoked artillery barrages and tank attacks from the well-armed Baath army, and the rebels have repeatedly been annihilated when they have tried to stand their ground.

The demonstrations and violence (some 23 people were killed, mainly protesters, on Friday) came as some 250 UN observers continued to fan out throughout the country. The mission has had some success in deterring massive artillery assaults by the regime on urban areas, but it seems pretty clear that the presence of the observers is not making a huge difference. The idea that the Baath regime will negotiate with the revolutionaries and give up some power in favor of a more pluralistic system (as happened in Yemen) is somewhat fantastic. The Baath in Syria is an old twentieth-century style one-party police state and does not play well with other children. In contrast, Yemen had already had a transition to multiparty elections in the 1990s, however fragile.

AP has a report on the continued shelling of Rastan near Homs. The situation in Syria is murky because the regime has tried to exclude journalists, but it is likely that the Free Syrian Army has a position in Rastan from which the Baath army is trying to dislodge it.

Violence in Aleppo, Rastan Amid Observer Warning by associatedpress