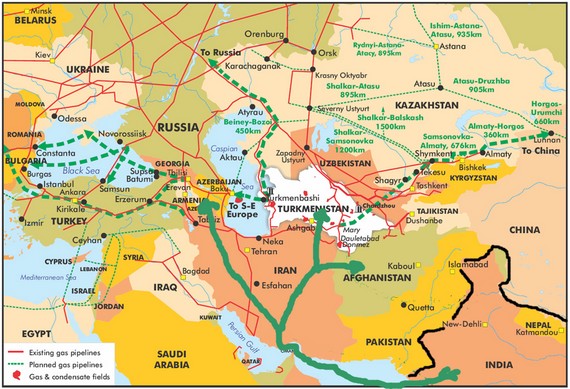 Secretary of State Hillary Clinton said in India on Monday that New Delhi can reduce its oil imports from Iran further, pressuring that country to fall in line with unilateral US sanctions and Washington’s virtual blockade on the sale of Iranian petroleum. India, however, pushed back, saying it would maintain its trade ties with Iran. Prime Minister Manmohan Singh offered an offset to his disappointing message to Clinton, however, pledging that he would open up ownership of retail businesses to foreign firms (at the moment retailers have to be 51% Indian-owned). US retail corporations are eager to get into the Indian market. I apologize for citing the tabloid Daily Mail here, but actually its story is much better and more thorough than most American outlets, who don’t mention that Singh told the Secretary of State “no” on Iran. The USA Today actually spoke about Iran’s “nuclear arms program” (which Secretary of Defense Leon Panetta says does not exist).

Also yesterday, a major Iranian trade delegation was in India, seeking to boost Iranian imports from India to $6 billion a year. Some Indian firms are afraid, but many see a rare opportunity here to expand their exports to Iran, filling the vacuum created by the increasing US and European Union trade boycott with that country. Those that are oriented in their trade to domestic markets or the rest of Asia might be especially bold in this regard.

Indian state-owned insurers are also stepping up to help insure the Iran-India oil shipping in the face of reluctance on the part of Western insurers.

So as to avoid having to use the international banking system, which the US Departments of State and the Treasury are bullying into declining to handle Iranian oil sales, Iran will accept rupees for much of its oil exports, and then recycle them back into India to purchase imports. The two are talking about trade in “agro and allied products, pharmaceuticals, engineering, shipping, banking, petroleum products polymer, textile, as well as e-commerce.”

Biased Western news outlets keep trumpeting that Iranian exports have fallen, presumably to shore up support for the unlikely idea that the US can unilaterally wish extra millions of oil onto world markets. Few bother to mention that they have fallen in the first two quarters of 2012 primarily because of an Iranian dispute with China over payment terms, delaying Chinese imports. But that dispute has been resolved. China’s oil imports are expected to rise 5% this year, and China will be back to importing a lot of Iranian petroleum soon. The Chinese are also about to deliver a new supertanker to Iran, the first of 12, which will increase Iran’s delivery fleet. And, Iran will accept Renminbi in payment for oil imported by China.

Alok Bansal has an excellent overview of Iran’s importance to India, and explains why Clinton’s pressure on PM Singh will almost certainly largely fail.

1. Iran is India’s gateway to Afghanistan, Central Asia, the Caspian Basin and the Caucausus since it is otherwise geographically blocked from these areas by Pakistan and China, its longstanding rivals. Some of these regions are resource rich, some are potential markets for Indian goods, and some are geostrategically important to India, a rising Asian power.

(modified from this site)

2. India’s Shiite Muslims and even Sunni Muslims reject the US boycott of Iran, and the ruling Congress Party has Muslims as one of its constituencies

3. India is growing rapidly economically and has very little in the way of hydrocarbons itself, and so is very thirsty for Iranian oil and gas.

Note that Saudi Arabia and the UAE are already pumping an extra 2.5 million barrels a day over what they were doing last year, and prices, while softening a bit on US and European slowdowns, are still historically high, suggesting that it will be very difficult for China and India to replace Iranian petroleum. The Sudan crisis has taken some supply off the markets and it could last a while.