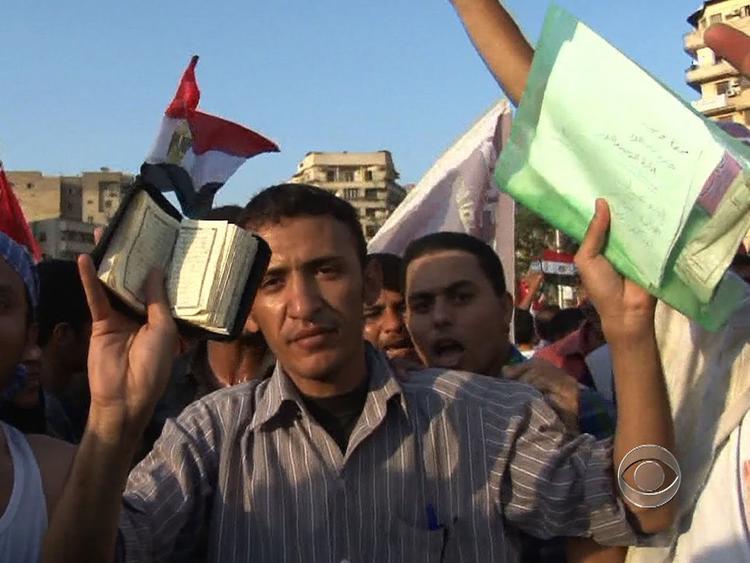 The on-again, off-again saga of the reports on deposed dictator Hosni Mubarak’s coma exemplified the uncertainty through which Egyptians are living on Tuesday.

In the American game of baseball, a player can ‘steal bases.’ That is, you get on base by hitting the ball hard and far enough to confound the opposing team long enough for you to run to it. But once on the base, you can gradually creep forward, and if you see that the pitcher of the opposing team is preoccupied, you can risk a run for it and advance to the next base. If the pitcher notices you, though, he can quickly get the ball to the team mate guarding that base, and have you tagged out.

Egypt is a game of baseball in which all the players are trying to steal a base. They are all seeing what they can get away with. The military has been playing this sort of game for nearly 18 months. It has tried out policies and if the people demonstrate in large numbers, has backed down. Likewise, the Muslim Brotherhood tried to stack the committee writing the constitution with its members, then acquiesced when the courts intervened. There is no real penalty for at least trying to put your interest above that of the nation, and the feeling seems to be that you should try, and then back down if there is an uproar. (I think this metaphor of trying to steal bases is better for trying to understand the political situation in Egypt than the idea that it is a game with no rules at all).

The campaign of Gen. Ahmad Shafiq, the secular candidate in Egypt’s presidential election, announced Tuesday that its tally gave its candidate 51% of the vote in the election held this past weekend. Official results won’t be reported until Thursday, and an annoyed High Electoral Commission reprimanded the candidates for announcing results prematurely. Muhammad Mursi, the leader of the Muslim Brotherhood, had earlier claimed victory, saying he has 52% of the votes versus 48% for Shafiq. Mursi’s millions of followers had already staged celebrations of his victory, and if it is in fact withdrawn in favor of Shafiq, there will be a lot of hard feelings and possibly even violence.

Tens of thousands of demonstrators, some 80 percent of them Muslim Brothers, filled Tahrir Square on Tuesday, staying into the wee hours and angrily denouncing the Supreme Council of the Armed Forces (SCAF) for issuing a constitutional addendum that would deprive the new president of much of his power and would strengthen military rule.

Shafiq’s claim is the most dangerous among a large number of perilous maneuvers taken by Egyptian political actors since last Thursday.

It was risky for the Egyptian judiciary to declare the parliament elected last fall to be null and void, and to order its dissolution (an executive decision not in fact a prerogative of the court). It thereby stole the votes of millions of Egyptians and delivered a slap in the face to the Muslim Brotherhood, which dominated the parliament and now have been deprived of the fruits of their victory at the polls.

Sending the parliament home is dangerous because if the Muslim Brotherhood concludes that the old Mubarak elite in the courts and the military is determined never to let them win in civil politics even if they play by the rules, then they may decide to play a different game which they can win, the game of violent theocracy.

We have seen this movie before, and it is entitled Algeria. (In 1991 there, the fundamentalist Islamic Salvation front won the parliamentary elections. The generals sent them home and dissolved parliament. That step threw Algeria into 15 years of vicious civil war, in which perhaps 150,000 people died)

I had thought that some of the sting could be taken out of the dissolution of parliament if Mursi, the fundamentalist, won the presidency. Then he could give the Brotherhood some cabinet posts, e.g.

But if the government now abruptly declares that Shafiq has won, despite the certitude of the Brotherhood that it came out ahead and knows the local poll numbers to prove it, then there is likely to be a blow-up. The Brotherhood will consider that it has had two elections stolen from it.

The openly fraudulent parliamentary election of fall, 2010, in Egypt was one of the causes of the revolution that began on Jan. 25, 2011.

I thought to myself, the 22-member SCAF cannot be so stupid as to take this sort of risk. Surely they know that the country is mobilized and could easily erupt. But as you see the SCAF on television and hear about their actions, you find it hard to escape the conclusion that yes, they aren’t being very bright, and appear unaware of how perilous their path is.

They are seeing what they can get away with.