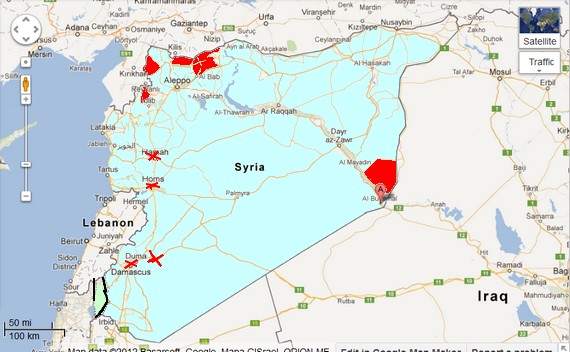 Free Syria exists along Syria’s borders with Turkey and Iraq. The Free Syrian Army, somewhat to my surprise, is beginning to take and hold territory, acting more like a conventional army than like a guerrilla movement. Admittedly, the territory is in the boondocks. But these boondocks are crucial because they control border areas and roads between Syria and Turkey on the one side, and Syria and Iraq on the other.

There is an old saying in the military that everyone wants to be a strategist but real men want to do logistics. That is, “The aspect of military operations that deals with the procurement, distribution, maintenance, and replacement of materiel and personnel.” Border crossings are pivotal to this sector of war-making.

The significance of the FSA taking Abu Kamal, the border crossing with Iraq along the Euphrates road, is that 70% of the goods coming into Syria were coming from the Iraq of PM Nouri al-Maliki, who had refused to join a blockade of Syria because of his new alliance with Iran. But al-Maliki’s attitude is irrelevant if the revolutionaries have Abu Kamal. This development is a nightmare for the Shiite-dominated government of Iraq, since it is fighting a low-intensity struggle with its Sunnis, who predominate in the areas abutting Syria. If Sunni fundamentalists in the FSA hook up with their Iraqi counterparts, that is trouble for al-Maliki and Iran. And, Iraqi Sunnis can now more freely export arms and goods to their Syrian co-religionists.

The taking of the checkpoints with Turkey gives the FSA freer access to the arms and other goods provided to them by Qatar and Saudi Arabia via Turkey (and with some oversight from the US Central Intelligence Agency, which isn’t involved in supplying arms but is interested in influencing to which groups they are given).

Al-Arabiya tv of Dubai (admittedly anti-al-Assad and Saudi-owned) showed scenes from Izaz, in Aleppo governorate, of fighters who said they had taken the border town and chased away the Syrian army troops. They showed three smoldering tanks that they said they had destroyed.

I was surprised that the rebels can now destroy tanks with such ease. They must have been provided with very powerful land sophisticated rocket-propelled grenades, as good or better than the ones Hizbullah used on Israeli tanks in 2006 to such devastating effect. I imagine that Russian RPG-29s are freely available in the international arms market, and Qatar and Saudi Arabia could buy quite a lot of them for their friends. The Saudis may also have American-made FGM-148 Javelins in their arsenal, and are now sharing.

The Qataris are alleged to have provided effective RPGs to the fighters of Zintan in Libya, allowing them to neutralize Qaddafi’s army, and then retake Zawiya and come into Tripoli. Of course, they had help from NATO, the planes of which also were destroying tanks and rocket-launching trucks when they were out in the open. In Syria the fighting is going more slowly because the rebels lack any sort of air support. Their RPGs may give regime helicopter pilots pause about flying against them, however. The rebels claim to have shot down a helicopter gunship last week.

But beyond this technical capability (which seems to have reached a new level of effectiveness quite suddenly), the FSA is likely benefiting from low morale in the Syrian army and substantial desertions and defections on the part of the foot soldiers and even tank crews. (Some of the demoralization comes from not being enthusiastic for the regime, which seems clearly to be faltering. Some comes from being Sunnis serving a regime that increasingly is deploying Alawite Shiite ‘ghost brigades’ against Sunni villagers.)

In Damascus, regime forces chased the rebels out of the downtown Midan area, and fighting raged in other neighborhoods. The rebels set fire to the main police HQ. Witnesses reached by journalists by telephone spoke of bodies piling up in the streets. The regime is trying to clear the capital of civilians, calling on them to flee, so its armor and artillery can get a clear shot at the FSA guerrillas.

But if the FSA is able to defeat and execute the Syrian military at Abu Kamal, the regime’s ability to come back in strongholds such as Midan does not do it much good. Logistics.

If it is true that the Russian ambassador to France said Friday morning that Bashar al-Assad is ready to step down ‘in a civilized manner,’ it is a sign that even he sees the logistical writing on the wall. (Don’t have confirmation as of this writing.)

The refugee problem is growing by leaps and bounds. Thousands of Syrians are said to be streaming into Lebanon, Jordan and Syria. (Jordan has maintained its open border policy and is setting up camps for the Syrians, contrary to what I mistakenly reported yesterday [note to self: twitter is unreliable if not corroborated]. Even before the recent, dramatic events, the UNHCR was reporting that the number of refugees seeking assistance had tripled since April, to 120,000. If the regime and the fighting are emptying out Damascus, that number could easily grow by a factor of 10.

Reports speak of the refugees lacking bread. Any major conflict situation produces problems of child abandonment and rape. There is a great deal of human suffering going on in Syria, and it will be a challenge to a world community already suffering compassion fatigue and undergoing continued economic hardship at home.