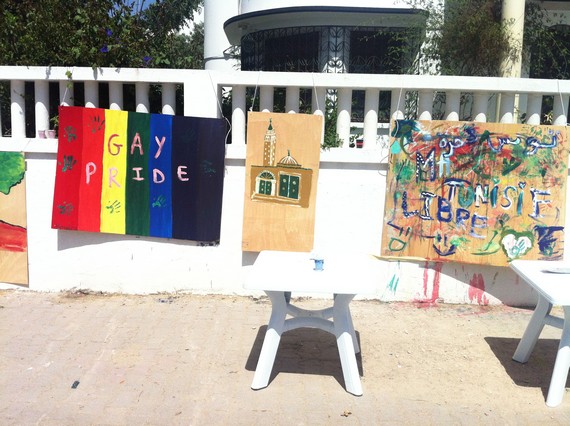 (Note that if you are viewing with an internet browser, you can enlarge the photo by pressing Control and the plus sign.)

In May, the upscale neighborhood of LaMarsa in the northeast of Tunis commemorated the hundredth anniversary of its founding. A street was blocked off, with contemporary Tunisian rock music playing and street artists chalking the street, and local artists displaying their works. Many exulted in Free Tunisia (La Tunisie libre or al-Tunis al-hurrah) I thought these three pieces made an interesting triptych!

About a month later, a small group of hard line Salafi fundamentalists disrupted an art exhibit in LaMarsa that they deemed religiously offensive. For more on this incident and the art involved, see this report by Cornell’s Middle East Collection Blog. I think it was mainly a stunt; it is not as though Salafis are numerous in Tunisia or as if anyone in La Marsa cares what they think. Some 58% of seats in parliament went to secular or centrist parties and individuals in October, 2011, and if the Salafis go on this way they may well push the country, as with Libya, toward the secular nationalists.