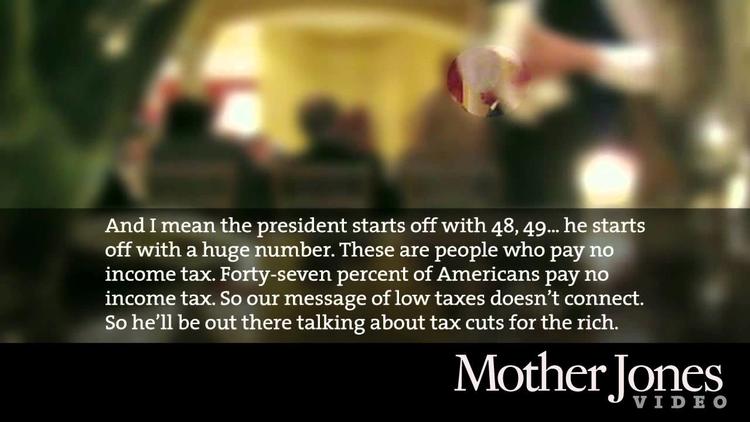 It turns out that Mitt Romney divides Americans into two groups. Nearly half, 47%, (145.7 million people) are leeches. They are the ones, he says, who ‘pay no income tax’ and expect the rest of the country to support them while they lounge around.

He actually says that this half of Americans see themselves as ‘victims’ who ‘deserve’ food.

Food? I mean, don’t human beings kind of deserve food? Is Romney for starving the poor to death so as to avoid having to pay any taxes? Would 46 million emaciated dead American bodies be all right by him? Note that food stamp recipients typically are temporarily on the program. Some are low-paid members of the US armed forces.

The first thing to say is that Romney himself may well have paid no income taxes in recent years. (He claims he paid 13% annually in taxes, but has not proved he paid *income taxes.*) Generally speaking, American corporations pay more for lobbyists than they do in Federal taxes.

The second thing to say is that a hundred percent of Americans pay taxes. Federal income tax is only one kind of tax. In Michigan, we have a 6% retail tax that is regressive and is paid by all consumers, no matter how poor or unemployed or retired. We have local property taxes that even the retired have to pay. Then, almost everyone who works pays payroll taxes toward social security, though the rich pay it only on income up to $96,000 a year and after that their further income is exempt (but why?). So actually, the working poor, workers and the middle classes are paying for social security all by themselves.

Social security is one of those government ‘entitlements’ that Romney wants to take away from us. But *we paid for it*, not the rich. Federal income taxes are irrelevant to it.

Likewise, the state-built infrastructure we enjoy was paid for by our state income taxes and retail taxes. These state benefits are not freebies or give-aways.

Half a million ‘tax units’ that paid no Federal income tax in 2011 were rich people who had tax loopholes. Rich people who only paid taxes to foreign governments are not even counted in the statistics. So are those wealthy tax deadbeats leeches? Is Romney one of them?

Actually, obviously *more* than half of Americans pay no Federal income tax. They are children, homemakers, retired and elderly, unemployed, under-employed, or working poor. Why would you expect them to pay Federal income taxes? I thought Romney was all upset when Ann Romney was accused of never having worked a day in her life because mother and homemaker is *work*. But now stay at home mothers are leeches and suckers for Obama because they don’t file an independent income tax form? And, what? – does he want to bring back child labor in the coal mines?

Almost all those who pay no Federal income tax are youth or elderly retirees or the working poor:

Sometimes Republicans say that half of *households* pay no income tax. But that is misleading, too. Only 18% of households pay no payroll tax *and* no Federal income tax, and most of those are, again, elderly retirees, youth or make less than $20,000 a year.

Actually the question is how many ‘tax units’ pay income tax. But if you have a household with a father, a stay-at-home mom, a 23-year-old unemployed son, and a retired senior, you have three tax units living in a ‘household’ and the married couple is the only ‘tax unit’ paying Federal income tax, with the working spouse the only real income earner. Romney seems to be upset by this household. But why? Sounds perfectly normal to me. The retiree is living off social security and/or a pension that he paid for all his life. The unemployed son borrowed money to gain a university education that gives him skills for a job that Republican economic policies under Bush robbed him of by throwing the country into a near-depression. But he likely will find a job when Obama’s policies produce results over the medium term. And, Romney says he doesn’t want homemakers to have to work outside the home (and so earn an independent income on which to pay taxes.)

Only by not looking too closely into all taxes and who exactly pays them and why, – can Romney create this phantom of the non-tax-paying leech. Well there is some truth in it. All he has to do is look in the mirror to see it.