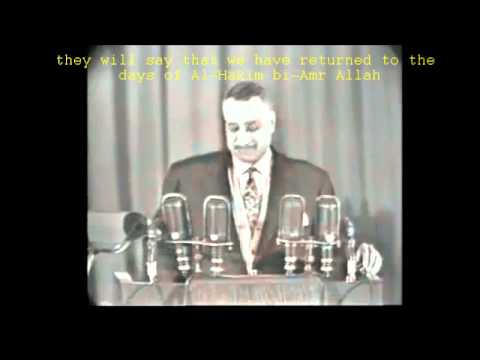 Then Egyptian President Gamal Abdel Nasser tells anecdotes (early 1960s?) about his meetings with the Muslim Brotherhood and their demand that he make all Egyptian women wear headscarves in public. How much things have changed is apparent in the humorous way Abdel Nasser dealt with what he saw as a completely unrealistic request. Ironically, the Brotherhood won, and gradually managed to pressure or convince almost all Egyptian women to wear headscarves when in public. And then, in June, 2012, Egyptians elected a leader of the Muslim Brotherhood as president of Egypt, succeeding Abdel Nasser (who is turning in his grave):

Note: I could only see the English subtitles clearly when I maximized the video to full screen (there is a toggle on the bottom right of the YouTube video, which looks like a frame).