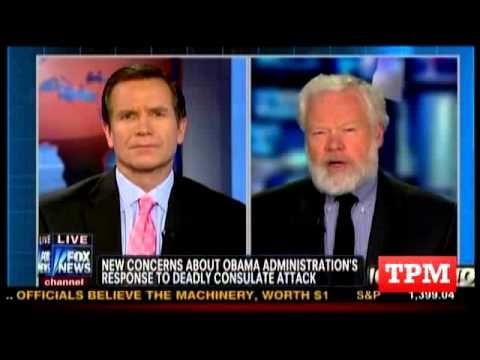 Pulitzer Prize-winning war journalist Tom Ricks was brought on Fox Cable News to discussion Susan Rice and the so-called Benghazi affair. His retort that Fox has been functioning as ‘a wing of the Republican Party,’ which obviously caused the interview to be hastily ended should not obscure what else he said.

Ricks’s main points were that

1. Benghazi was a small firefight, and he has covered many firefights, and no one knows what happens during one. Actually, Tolstoy’s War and Peace is good for conveying that sense of chaos on the battlefield, during which only a view from above can distinguish the progress of flanks and wings; the soldiers caught in the midst of it all can’t see the larger battle. Blaming Susan Rice for not knowing what exactly happened at Benghazi (it was not even her portfolio) is crazy– even the people involved probably don’t know the exact details.

2. The focus on Benghazi is invidious. Ricks points out that several hundred American contractors were killed in Iraq, but no one even bothered to count the exact number (least of all, he implies, Fox Cable News, which presented the war and its sacrifices as somehow necessary to the US and during which anything was forgiven).

3. The minority Republicans in the Senate cannot stop President Obama from making Susan Rice Secretary of State if he wants to, which is what actually explains why Sen. John McCain and others are now softening their talking points about Rice. It is one thing to try to manufacture an artificial scandal before an election in hopes it will help your side win. It is another to go on with a campaign that has evoked zero interest outside the Beltway, which which cannot be won, after you’ve had your ass handed to you at the polls.

4. Fox Cable News played an important role in helping push this artificial non-story, for partisan political reasons. That Fox is GOP TV is not in doubt. It is run by Roger Ailes and its editors dictate a right wing editorial line to the anchors and reporters. In fact, Ailes was already dreaming of ‘GOP TV’ in the Nixon era, when FCC rules would have made it illegal.

As for Benghazi, Republican senators have said all kinds of silly things. Lindsey Graham maintained that ‘al-Qaeda’ was in control of the city all summer. I was there. It is not true. If he means Ansar al-Shariah, it is so weak that it was setting off a few ineffectual pipe bombs on a handful of occasions, and the crowds angered by the death of the US ambassador burned its HQ down and chased them out. Some control.

The Fox line was that Obama keeps saying al-Qaeda is largely defeated, which caused him not to notice that it controlled Benghazi and so caused him not to have the US consulate there properly secured. In order to cover up his embarrassment that the ghost of Bin Laden struck back, he lied and had his officials lie that the consulate attack was the work of an ordinary mob enraged by the Islamophobic ‘Innocence of Muslims’ ‘film.’

But since Ansar al-Shariah is a few thousand people in a city of over a million; since it is not an al-Qaeda affiliate; since Benghazi had civil municipal elections in May, in which a woman won the most votes; since while the city has some militia problems left over from the revolution, it is a perfectly normal place and not some sort of Taliban-controlled Khost; since there were in fact demonstrations near the consulate on September 11 against the film; and since, as Ricks noted, it is hard to know what exactly happened in the aftermath of a small firefight; since Ansar al-Islam denied carrying out the attacks and is anyway not al-Qaeda; the whole Republican/ Fox narrative is completely ridiculous and a mere stroll in the real Benghazi would be enough to make it evaporate.

Or, a few sharp words from a veteran war correspondent would do.

You wonder if, just as Edward R. Murrow did in Joe McCarthy and Jon Stewart got CNN’s ‘Crossfire’ cancelled, Ricks might not just have begun the unraveling of the Fox brand.