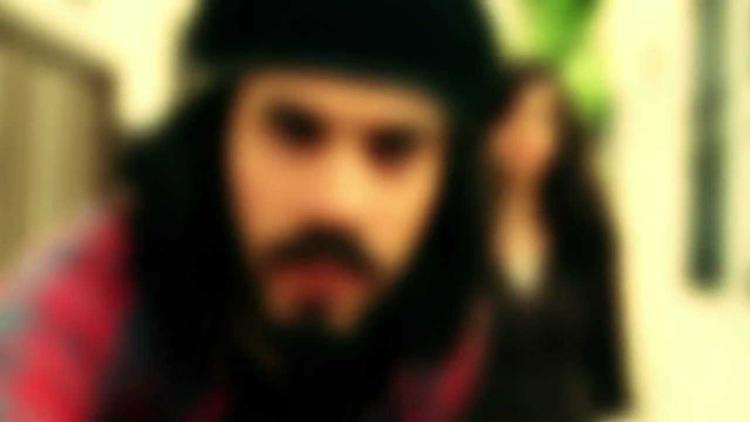 Update We’re coming into the final stretch of the annual fundraiser. I am *so* grateful to all the fans who have donated. We’re having a great year and are coming down the home stretch. Just to underline that readers here are getting a different, and I would argue more accurate view of the world than is often visible in corporate news media. Television news won’t say frankly that Ariel Sharon committed war crimes or bring up Bob Gates’s involvement in Iran-Contra, or say bluntly that 17% of West Virginians don’t have drinking water because the coal industry is intrinsically dirty and needs to be shut down.

Remember that those who give at $100 or more will get special access to the site, with regular overviews by me. And that great Informed Comment t-shirt!

—–
It is time for the annual Informed Comment fundraiser (or as I tend to think of it, an opportunity for those readers who can and would like to contribute a voluntary yearly subscription).

Those of you who donated last year supported several important trips to the region so as to have first-hand, on-the-ground impressions that would help me interpret the news.

Years ago I decided that I did not want to put “Informed Comment” behind a firewall and charge a subscription fee for it. That just isn’t who I am. In my own view, 9/11 kicked off a long crisis between the United States and the Muslim world that I felt a duty to attempt to interpret and analyze for both publics, not just for well-heeled elites. This is a democratic blog, for the people and in dialogue with the people, for the common weal.

Still, considerable infrastructure and programming expertise is increasingly required to keep this site online, fast and improving. Your voluntary subscriptions or donations (however you want to think of the reader contribution to the maintenance of the site) keep juancole.com running even during the busiest news spikes when we have tens of thousands of visitors per hour hitting the site.

Although I have some research money from my university, there are categories of expense it does not cover, and my ability to go off spontaneously to the region when there are important developments is enhanced by your subscriptions (academic fellowships have to be plotted out at least a year in advance, which is too inflexible for my style of academic journalism). Also, I do some pro bono speaking and traveling for, e.g. peace groups, and you support those expenses, too.

Travel and Field Reporting in 2012

I spent much of May and early June in Tunisia, Egypt and Libya.

My trip to Tunisia allowed me to catch up with developments since I had last been there the previous summer. I was impressed at the return to normality compared to the months after the overthrow of dictator Zine El Abedine Ben Ali. Many more shops were open, and there were even cultural festivals.

I attended a meeting of parliamentarians, judges and attorneys thinking about how to monitor the writing of the new constitution. I gave a talk in Arabic at The Center for the Study of Democracy and Islam in Tunis, and one in English, on democratic transitions, at the Center for Maghrebi Studies in Tunis (CEMAT). The latter kindly helped set up an interview for me with Sheikh Rashid al-Ghanoushi, the intellectual leader of the ruling al-Nahda Party, which has Muslim religious commitments. CEMAT also arranged for me to speak at the university in the southern, old Islamic city of Kairawan in Arabic on US policy toward the Arab Spring. 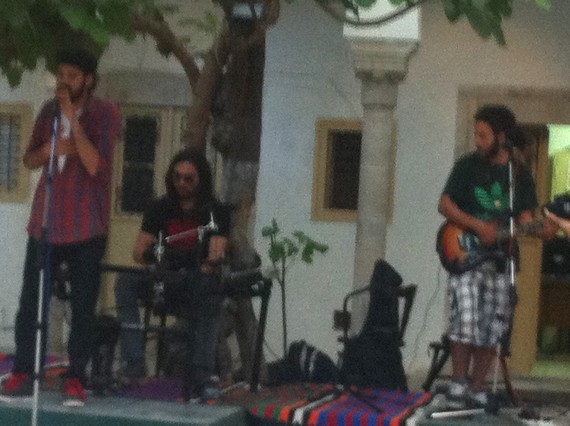 I was delighted to get a message while there that “the bloggers” wanted to meet me, and I was able to have dinner with activists who had helped make the revolution, with whom I kept in contact afterwards.

Then I went on to Egypt, where I was privileged to hang out with my former professor and major human rights activist Saad Eddin Ibrahim at his Ibn Khaldun Center. It trains young people as election observers, and through Saad I met a wide range of Egyptians devoted to the new, democratic politics of the country. They took me around to see the voting stations during the first round of the presidential elections. There were some 14 candidates all together in that phase, with 5 of them real contenders, and it was always fun to talk to people about which they supported. 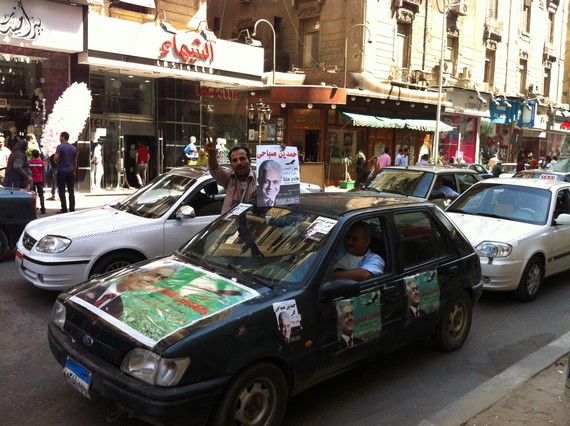 Campaign procession for leftist candidate Hamdeen Sabahi in Cairo, May, 2012

Stuck with one regime since 1952, they suddenly had a choice, and they were enthusiastic about this new pluralism. The five leading candidates revealed the political geography of the new Egypt. Three of the five are secularists, and one, Hamdeen Sabahi, is a left-labor leader who won Alexandria on the strength of union organizing. Although Muhammad Morsi, the Muslim Brotherhood candidate, went on to win the run-off, in the first round his secular opponents together got some 60% of the vote. Egypt is more complex than many pundits think.

Then, I finally got to Libya. A kind friend, the great poet Khaled Mattawa, arranged for an invitation from the transitional government, which luckily doubled as a visa when I arrived in Benghazi. He introduced me to a candidate for the parliamentary elections, an unveiled woman who runs a girls’ school in Benghazi. (Some 20% of seats were won by women). And to an author who spent 11 years in Qaddafi’s jails for advocating democracy. And to many other determined, enthusiastic people.

I gave a public talk in Arabic, and they audience thanked me for my frankness and “transparency” (you could never just come out and say things openly under the dictatorship). 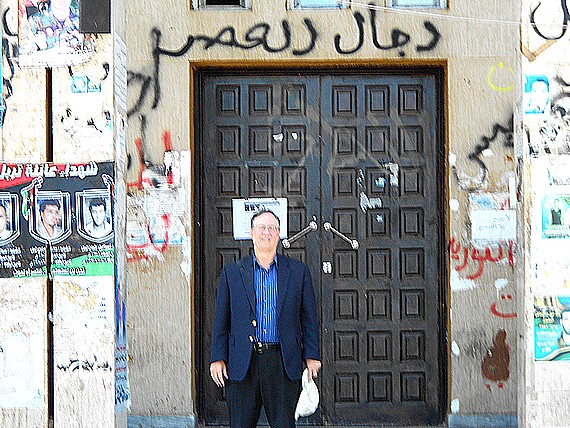 Juan in front of the Courthouse, Benghazi

I went on to Tripoli, where I also spoke publicly, and went around talking to shopkeepers and people in cafes, etc. One day a friend of a friend drove me out to Misrata, the country’s third largest city, which had endured a brutal siege for six months, fighting tanks and artillery with light arms and an occasional RPG. They had set up an impromptu folk museum of the revolution, lined with heartbreaking photographs of the children and youngsters who had been killed. They had made knickknacks out of the shrapnel rained down on them by the monster, and painted them brightly in defiance.

Libyans have a special way of thinking, and the ways in which they have dealt with post-revolutionary chaos have often been plucky and innovative. They’ve held spontaneous municipal elections, and pulled off an impressive national parliamentary election, and now have a legitimate if green democratic government. There are problems of militias and of occasional violence, but though these are real, it seems to me that most outsiders exaggerate them. Libya is not a violent hell-hole and it damn sure isn’t like Somalia, as some pundits have alleged! I wouldn’t have anywhere nearly as good an idea of the real situation there if I had not just gone.

I later in the year made two trips to Istanbul. I was able to arrange a rather furtive meeting with some young Syrian expatriate oppositionists there. At the World Forum in mid-October I was able to hear talks by Libyan politician Mahmoud Jibril, by Egyptian activist Ahmad Maher, by Abdulbaset Sieda of the then Syrian National Council, by PM Tayyip Erdogan himself, and by many other principals of contemporary Middle East politics.

In terms of visibility, from the beginning of the year till now, Informed Comment has had about four and a half million visitors at its server, though it is increasingly impossible to know how the posts are mirrored elsewhere or are emailed around or what their readership is in those forms. During peak events like the Republican primaries, the Egyptian elections, or the Benghazi crisis, daily visitors have spiked to 100,000 at the server alone. Informed Comment is typically one of the top weblogs in on world politics and politics in general as ranked by Technorati.com. Your support helps me intervene in the debate on Middle Eastern issues in the United States and throughout the world.

Middle East issues are often framed by right wing media such as Fox Cable News in Islamophobic and frankly racist ways. Unscrupulous “news” providers play on the comparative lack of good information and analysis to manipulate public opinion on these matters so as to create fear and promote right-wing policies. Informed Comment is one of the few solid counterweights to this propaganda. Corporate news outlets, even relatively liberal ones, can almost never report evenhandedly on controversial issues such as the plight of the stateless Palestinians, because of fear of consumer boycotts. Informed Comment is unconstrained by such considerations.

Voluntary subscriptions or donations can be sent to Informed Comment via the contribution link at the top of the right column (which takes Paypal payments or credit cards). Here is the direct link again:

For 2013, I have several projects at Informed Comment for which I’d like to those who can to support. These plans continue to serve the larger goal of promoting understanding between the West and our neighbors in the Middle East.

We have started on a reference section on the Middle East which we will develop much further in 2013.

To make all these projects a reality, I do need your help. Our budget is a tiny fraction of any other news organisation in the world. Your contribution here very well may make a greater difference in the news landscape than anything else you could do.

Those who donate $100 or more will receive a blue and gold Informed Comment Polo shirt. Some kind readers give more than once a year, but if you want the Polo shirt, consider making a single larger donation. If you make a donation of over $100 and already have our Polo shirt and would prefer an autographed copy of one of my books, please just let me know in the comment with your donation. I would be delighted to send you a personally dedicated copy.

Your donation helps me keep Informed Comment independent and prolific. Together we keep independent media alive. I would like to thank all my readers and contributors again for your support in 2012 and look forward to an even more productive 2013 together. Thank you for supporting our independent thinking and dialogue!