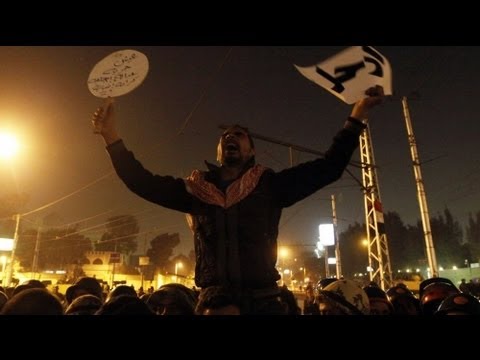 Many Egyptians were shocked at the militancy of the Brotherhood supporters on Wednesday when they intervened at the presidential palace, and many are convinced that President Muhammad Morsi is taking hard line, authoritarian and inflexible positions on orders from Supreme Guide Badie and his “Office of Pious Counsel” 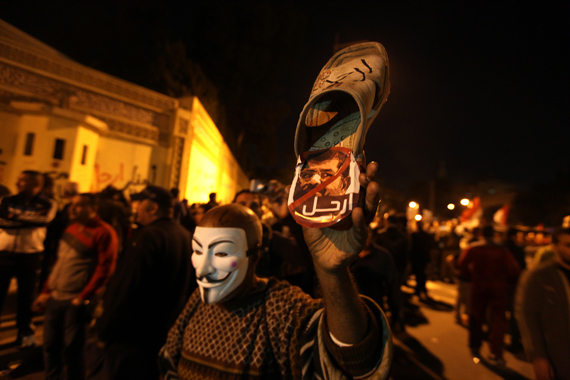 The general unwillingness of many of the police and army to intervene actively in favor of President Morsi appears to have put a fright into him and his administration. After earlier being completely inflexible in the face of the protests, they are now hinting that the referendum on the constitution could be postponed past the December 15 date initially designated by Morsi.

There was also a big demonstration in Alexandria, where crowds chanted, “The people want the execution of the president.”

Muslim Brotherhood supporters of the president attempted to avoid clashes of the sort that broke out Wednesday, demonstrating in their tens of thousands in the old Islamic quarter in front of the al-Azhar Seminary or at the Rabiah al-Adawiya Mosque in Nasr City not so far from the presidential palace.

The liberal political leaders of the National Salvation Front coalition, including Nobel Peace Prize winner Muhammad Elbaradei and the former secretary-general of the Arab League, Amr Moussa, rejected Morsi’s call for a dialogue meeting on Saturday. They insisted that Morsi first rescind his decree of Nov. 22 in which he put himself above judicial review.

Egypt faces a tough weekend, with a completely polarized public. Aljazeera Arabic is reporting that a few small parties, including The Ghad Party and the liberal Muslim Wasat Party, are saying they are willing to negotiate with Morsi, though their demands remain thesame.