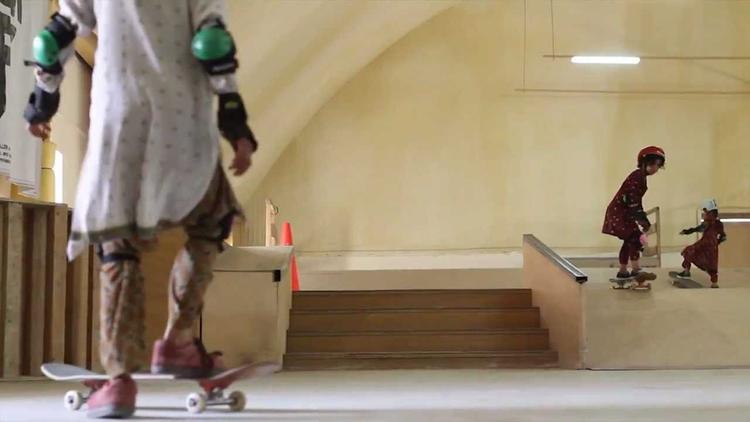 Skateistan is a skateboard NGO in Kabul, which maintains a facility for skateboarding and gets as many as 300 youth to attend as spectators at competitions.

The organization maintains that 40% of skateboarders in Kabul are girls and young women, and that it is one of few relatively gender-integrated sports.

Although in the 1990s under the Taliban, Afghan women were mostly forced to veil, secluded and attempts were made to deny them an education, the history of girls’ and young women’s lives in the country is far more varied in modern history. In the 1980s under the Communist government urban women had gained many rights and freedoms, and most girls were put in schools. In the late 1960s, young women from elite families in Kabul had participated in the miniskirt craze.

Since the dark days of 1999 and 2000, when the Taliban forbade girls’ schooling, there has been very substantial progress. Over 3.2 million girls are now in school, and via UNICEF programs the Afghanistan government expects a 20% increase in primary school enrollment in 2013. Since 2001, female literacy has tripled. But it still stands at only 13%, among the lowest in the world.

Despite the hatred for UN agencies among the US right wing, especially the Neoconservatives, UNICEF is among the main drivers of increased female education and literacy in Afghanistan, and deserves our support.

In much of Afghanistan, sadly, gender segregation and obstacles to women’s education and careers are still thrown up by traditionalist men, even many who despise the Taliban. Of the over 4 million school-age Afghan children not attending classes, about 60% are girls.