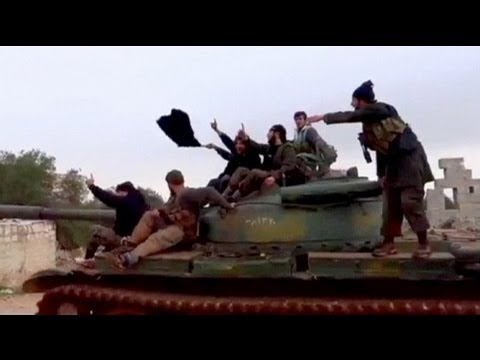 The forces seeking to overthrow the Baath government of Syrian president Bashar al-Assad have made further advances both in the north in Aleppo and its surroundings, and in the suburbs of the capital of Damascus. But the civilian population in the war-torn country’s urban areas are facing food and electricity shortages:

On Damascus, the USG Open Source Center translates this report from Al-Sharq al-Awsat for Monday, Dec. 10:

“The humanitarian and security situation in the capital Damascus has continued to deteriorate as the shelling of the southern and eastern neighborhoods intensified yesterday and most of the city’s entrances were closed while the violent shelling of Daraya and Mu’addamiyat towns in Rif Dimashq continued.

“Residents of the capital said the regime forces closed the Dar’a-Damascus (south) highway yesterday morning and also several other minor entry points and the highway was reopened at noon but then closed again, particularly at Nahr Ayshah, Al-Hajar al-Aswad, Al-Asali, and Al-Yarmuk Camp where violent clashes took place. An eyewitness told Al-Sharq al-Awsat that “vehicles piled up all along the highway from Damascus to the Sahnaya junction and bodies were seen on both sides of the minor roads that were also closed”, adding that “the south Damascus area is a battlefield…, bodies, destruction, and constant shelling…

“…the bread crisis in Damascus is worsening. People mass in their hundreds in front of bakeries to get a bundle of bread sold at 15 Syrian liras while it is sold in the nascent black market in the bakeries vicinity at 100 liras (the dollar exchange is between 88 and 92 liras). Ahmad al-Dimashqi says: “The minimum waiting time in a bread queue is between two and three hours. Some people go to the bakery after the dawn prayers and remain until morning just to get a bundle of bread.” The bread crisis that is worsening daily happens with the house liquid gas crisis where the price of a cylinder in some areas has reached 2,000 liras when its official price is 500 liras. This is in addition to the kerosene crisis that is missing even in the black market, particularly in the hot areas…

“At the subsistence level, the electricity cut off rates have increased in Damascus and some areas in the Rif, like Jarmanah, Al-Ghawtah al-Sharqiyah, Sahnaya, Qudsiya, Qudsiya neighborhood, Dummar, and Dummar project where the outage ranges between eight and 12 hours. In the hot areas like Daraya and Mu’addamiyat, it remains cut off for successive days while in the capital’s neighborhoods between six and eight hours. In Barzah, Al-Qabun, Al-Abbasiyin, and the southern neighborhoods, the outage reaches 12 hours. In the capital center and northern neighborhoods of Al-Salihiyah, Al-Muhajirin, Al-Maliki, and Abu-Rummanah, the cut off is reduced and ranges between three and four hours and is not cut off at all from some neighborhoods. The residents were therefore surprised the night before yesterday when power was cut off from all the capital’s northern neighborhoods at 0300 hours and continued for two hours amidst silence and suspicious movements by the security forces in these areas, according to activist Ahmad al-Dimashqi.

Meanwhile, there are also bread lines and a collapsing economy in Aleppo, most of which is now held by the revolutionaries. Euronews reports:

the revolutionaries have driven Syrian government troops out of much of the north of the country around Aleppo. Aljazeera English reports: