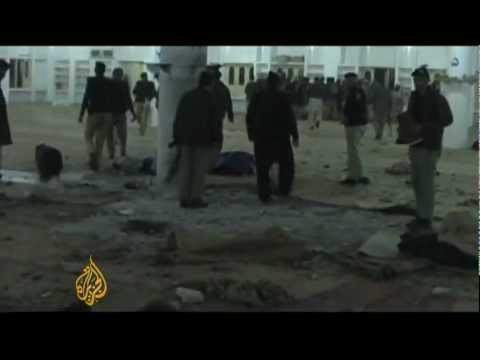 Pakistan on Thursday descended into the kind of violence that tends to occur in Iraq, with a distinct Sunni-Shiite cast to it. But the larger context was a spillover of enmities from Afghanistan.

Three bombs were set off in Quetta. The first targeted a pool hall in a Hazara Shiite neighborhood. When people came to the scene, including police and rescue workers, the attackers set off another bomb, killing many of the rescue workers.

People in Quetta complained bitterly about the lack of central government interest in their security problem. Pakistan’s government is weak and inefficient, and the government of President Asaf Ali Zardari is highly corrupt.

Baluchistan is a very lightly populated province, where only 8 million of Pakistan’s 180 million people live. Baluchistan as a territory, though, is huge and mostly desert and mountains, comprising 44% of Pakistan’s land mass. It is sort of like Pakistan’s Wyoming, only if Wyoming were nearly half the US. Baluchistan has natural gas, which its people feel is appropriated by other Pakistanis, so that they don’t benefit from it and even don’t have much electricity.

Its capital is Quetta, a city of 2 million. Quetta grew in the 1980s as Afghan refugees fled there, and after the US overthrew the Taliban in Afghanistan, many of them relocated to Quetta.

Some 300,000 Hazara Shiites now live in Quetta, refugees from Afghanistan, which was occupied by the Soviets in the 1980s and then by the Taliban from the mid-1990s. Hazara are probably about 22 percent of Afghanistan’s 34 million people, that is, likely there are over 7 million of them. They are Shiites, unlike the Pashtuns and Baluch that are their neighbors, many of whom are hard line Sunnis. Afghans and Pashtuns often look down on Hazaras as menials.

Hazara speak Dari Persian and have distinctive East Asian facial features. They are said to be descendants of tho Mongol invaders of the 13th century.

There is a major Sunni-Shiite struggle in Pakistan that has cost minority Shiites hundreds of lives. The Taliban, hyper-Sunni fighters of Pashtun heritage, have a long set of grudges with the Shiites. There has been a deadly targetting of Hazara in Quetta for some years. The culprits are usually called Lashkar-e Jhagvi or Sipah-e sahaba (army of the Companions of the Prophet). They are technically banned but operate freely in the country.

On the other hand, Dawn newspaper blames one of the three blasts in Quetta on a Baluch separatist movement. [Not, as a kind reader pointed out, the bombings in the Hazara neighborhood but another one that struck Pakistani security forces.] Some Baluch may be upset about 300,000 Shiite immigrants.

Likewise, there is a Saudi-Iran rivalry inside Pakistan, with the Saudis supporting hard line Sunnis and Iran supporting Shiites. In that regard, Thursday’s events in Pakistan are part of a larger Sunni-Shiite struggle that affects Syria and Bahrain, as well.

On the other hand, Quetta is a major smuggling thoroughfare between Pakistan and Iran, and you could imagine ethnic gangs involved in a turf war (the kind of thing that happens in Karachi).

There was also a bombing in Swat Valley, where the Taliban have been weakened but not expelled by the government.