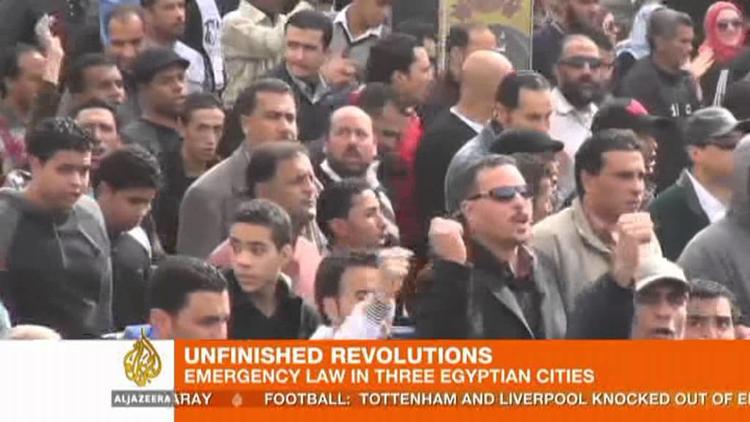 Egyptian President Muhammad Morsi on Sunday put three Suez Canal cities under emergency law on Sunday for a month. Port Said, Suez, and Ismailiya had seen violence by angry crowds against government offices and in some cases the HQ of the Muslim Brotherhood. Being on the Suez Canal, the cities are sensitive for security reasons. The violence began on January 25, the commemoration of the beginning of the 2011 upheaval that overthrew president-for-life Hosni Mubarak.

In Ismailia, government offices were attacked, including the municipal diwan, and the Muslim Brotherhood HQ was burned. The army came into the city on Saturday. In Port Said, the verdict on Saturday condemning soccer hoodlums accused of provoking a stampede in a stadium last February were sentenced to death on Saturday. Supporters of the local team erupted in anger.

Although a curfew was supposed to begin Sunday night, Egyptian newspapers say that shopkeepers in Ismailia paid no attention to it, serving customers after midnight.

Aljazeera English reports that people in Port Said were active in protests despite the curfew.

Members of the leftist, centrist and liberal parties making up the National Salvation Front coalition condemned Morsi’s decree as a form of “treason against the nation.” It is not clear that any of them will agree to meet him, as he suggested, at 6 pm on Monday.

The National Salvation Front is demanding that Morsi resign and pave the way for new presidential elections, saying that he has lost his legitimacy because of his high-handed actions. Particularly resented is that Morsi rushed through a fundamentatlist-inflected constitution, which he had earlier agreed ought to be a consensus document.

Egypt’s protest movement has a long tradition now of agitating against the emergency law of 1981, which suspended key civil liberties. Morsi’s invoking of an emergency law angered them, since they had finally forced Egypt’s military and elites to revoke the state of emergency. Some Egyptians fear that invoking emergency laws risks returning to dictatorship. They remind Morsi that before he came to power in elections last summer, he had spoken of emergency laws as inherently dictatorial.

Morsi made himself highly unpopular with more centrist or secular-minded voters by rushing the completion of a constitution late last fall, then putting it to a referendum even though the judges went on strike in protest. The constitution is not a consensus document. Massive demonstrations were staged against him all over the country. Things had quietened down until last Friday’s two-year commemoration of the revolution.

It seems unlikely that the crowds can get rid of Morsi through street protests. He has lots of supporters, and he won the election fair and square last June.

On the other hand, many non-Brotherhood parties are beginning announce that they will boycott the parliamentary elections to be held this spring. They are calling on Morsi to call new presidential elections first and saying he has lost his legitimacy.

Egypt continues to ratchet toward polarization.