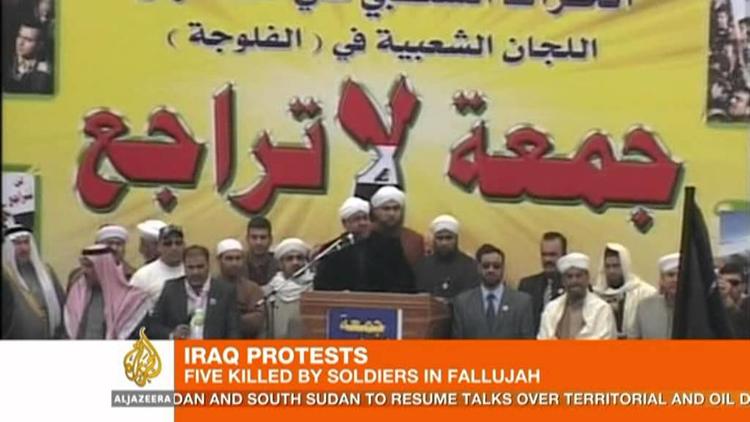 Sunni Arab tribes in Falluja (presumably branches of Dulaim) on Saturday demanded that the government turn over to them within 7 days the troops who fired on protesters on the outskirts of the western city of Falluja, killing 6 and wounding 19 on Friday. Otherwise, they say, they will declare jihad on government troops. The protesters came from a nearby village and were attempting to join a demonstration in downtown Falluja, but were blocked by an army road block. When the protesters began throwing stones and water bottles, and then advanced on a police care, attempting to set it ablaze, the troops began firing live ammunition, first in the air and then at the protesters. The army says that the protesters tries to set a police care afire.

The mistake of the al-Maliki government was to attempt to prevent people freely from coming to Falluja for a peaceful demonstration in the first place. A second error was to use troops who had automatic weapons and live ammunition, instead of riot police with rubber bullets.

The killings of unarmed protesters has worsened al-Maliki’s crisis. Protesters in Falluja say they will camp out in the city square until their demands are met, and similar protests and small tent cities are popping up in Ramadi, Baquba, Samarra and other Sunni Arab urban centers. Many of them are now saying that al-Maliki must step down, and that they will camp out until he does (thus echoing tactics deployed by Cairo protesters at Tahrir Square in 2011).

During the past few weeks, Sunni Arabs have been regularly demonstrating against the Shiite-dominated government of Prime Minister Nouri al-Maliki. Initially they were demanding the release of Sunni Arab youth who they assert were falsely arrested. They also wanted an end to ‘debaathification’ or the exclusion of members of the Baath Party from public office (Sunnis were disproportionately prominent in that party). Al-Maliki has released hundreds of prisoners, but has not reached out to leaders in the Sunni-dominated provinces in an attempt to bring them back into the Iraqi mainstream. Because there are also Sunni Arab guerrilla groups who engage in massive terrorism, the Shiite government of al-Maliki views the whole Sunni Arab population as dangerous and as perhaps running interference for the terrorists. (I suppose there is an analogy to the view the British took of Catholic neighborhoods in Northern Ireland during the troubles; but the British were better about trying to develop community policing methods).

It may be that al-Maliki’s support for Syria’s president Bashar al-Assad is among the grievances driving the prptesters to come out. Many Sunni Arabs in northers and western Iraq are supporting the Syrian rebels.

Many Sunni Arabs feel cheated because the Iraqi Party, which they largely backed, got the most votes in the 2010 parliamentary elections. But it was still a minority in a divided parliament and it was al-Maliki’s Islamic Mission (Da`wa) Party that was able to form the government by creating a coalition with more than 51 percent of the seats.

One of al-Maliki’s coalition partners in fall of 2010, the Sadr II Bloc of Muqtada al-Sadr, has withdrawn from his cabinet and denounced his government as dictatorial, and although it is strongly Shiite, it is supporting the Falluja demonstrators. Muqtada al-Sadr condemned the killing of the demonstrators, but called on them to pursue peaceful protest and to exercise self-restraint in their continued confrontation with the government.

theoretically, al-Maliki could, in accordance with the constitution, be removed from power by a parliamentary vote of no confidence. If he lost the backing of more Shiite groups and of the Kurds, his government could fall, which is what many Sunni Arabs are now seeking.

In speeches on Saturday, some in Falluja asked who the Iraqi army serves, implying that it has become a tool of Shiite Iran.