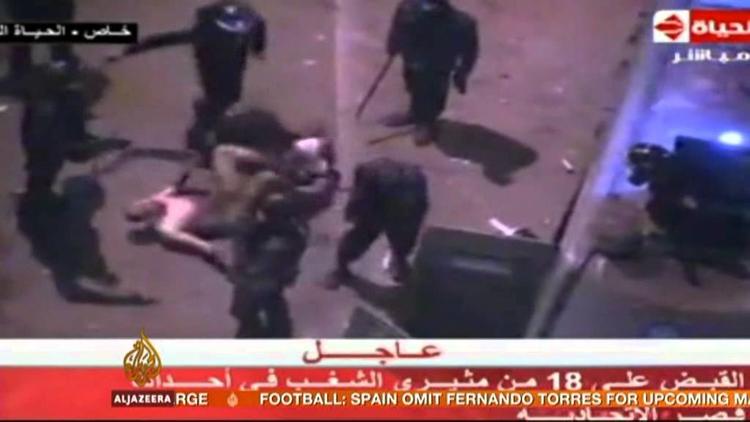 Tens of thousands of Egyptians demonstrated around the country on Friday, despite cold, rainy weather in Alexandria and along the Canal zone.

In Cairo itself, crowds gathered in front of Morsi’s presidential palace in Heliopolis, and some youth threw Molotov cocktails. Aljazeera English reports:

Crowds in major cities chanted that they wanted new presidential elections, i.e. they want President Muhammad Morsi to step down. They also denounced the “Muslim Brotherhood-ization” of Egypt.

In Port Said, thousands of demonstrators demanded the fall of the Morsi government and some posters even proclaimed “the Republic of Port Said.”

In the Delta city of Kafr Sheikh, 25 demonstrators were injured by the military-grade tear gas deployed by police. Kafr Sheikh is a big textile center, and textile workers have taken the lead since about 2006 is demonstrating and striking. Since the Muslim Brotherhood is socially conservative and partial to business, it hasn’t been good for unions, and many of the protests in Egypt are likely in part expressions of the rage of union members.
Morsi squeaked by to victory last June, but this fall began acting increasingly dictatorially, declaring himself above the courts and pushing through a fundamentalist-tinged constitution that has terrified secularists, women and Coptic Christians. Although Morsi has climbed down from his claim of judicial immunity, he is still acting high-handedly. His largely appointed, mostly Muslim Brotherhood-dominated Consultative Council (a sort of senate) has hastened to legislate without waiting for the lower house to be elected.

Worst of all, Morsi has not met the demands of workers for better wages and working conditions, among the major drivers of the revolution against Hosni Mubarak two years ago. His constitution attempts to regiment workers and only allows for one union per trade.

On top of everything else, over 20 football hoodlums in Port Said were sentenced to death two weeks ago for their role in provoking a stampede just about a year ago at the city’s soccer stadium, killing scores. After the verdict, local families tried to break into the prison and free their relatives or sons, provoking clashes that left 41 dead.

Despite a reconciliation meeting between Morsi and the secular or centrist opposition on Thursday, there isn’t much sign of reconciliation.

Morsi should not have rushed that constitution through. He had hoped to forestall further intervention against him by his bold gestures. Instead, he has alienated the leftist youth who spearheaded the revolution, and who had up until last fall been willing to work with the Brotherhood.