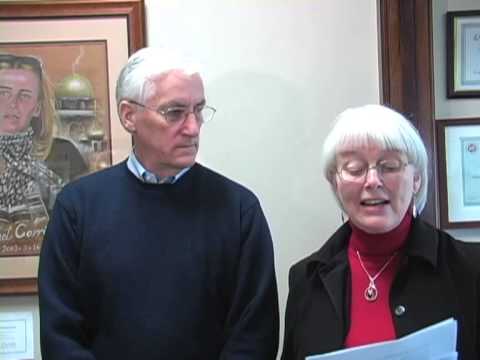 Rachel Corrie’s parents speak out on the tenth anniversary of her killing by the Israeli operator of a military bulldozer, who ran over her as he approached a Palestinian home he intended to demolish. There were two men in the cockpit, one to observe and the other to drive the machine.

Rachel risked her her life to make a statement about the systematic Israeli degradation of the living conditions of the Palestinians (tearing down homes of relatives of anyone who resists the occupation is just one such policy).

Here is a short documentary on the Rachel Corrie story:

Supporters of Greater Israel succeeded in having the performance of a play based on her life cancelled in New York, but it has gone on to play elsewhere, and she and her legacy have not been erased, as the extreme nationalists would have liked. In some ways the controversy over the play led to the founding of the influential blog Mondoweiss, which has done much to create spaces in which hard line Jewish nationalism can be critiqued.

But let us recognize the harsh reality: the condition of the Palestinians under Occupation is much worse now than 10 years ago. The Palestinians have suffered dramatic loss of real income even compared to the 1990s. Those in Gaza are still under an Israeli blockade that keeps them from exporting most of their products and keeps half their children in a condition of food insecurity. Nearly half of Gaza families were enclosed there after having been chased out of their homes in southern Palestine by the Jewish fighters trying to found Israel in 1947-48. Many of them can see their former property from Gaza in what is now Israel, could walk there in an hour if allowed to. They never received in reparations for land and property now worth billions. In the West Bank, aggressive Israeli colonization of Palestinian land continues apace, and a Palestinian state is no longer even plausible. Millions of stateless Palestinians have no basic human or civil rights, lacking citizenship in a country that could defend those rights.

Rachel’s work was only beginning. She can’t do it. We must.