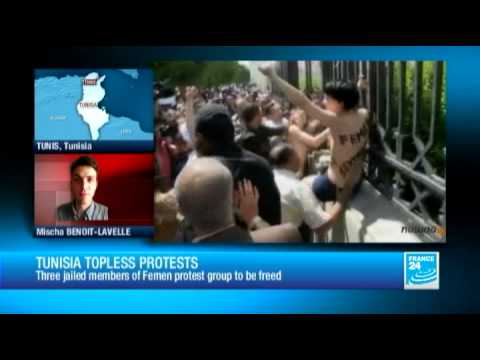 A Tunisian court has given suspended sentences to three European members of Femen (2 French, 1 German) who had bared their breasts in public to protest the jailing of a Tunisian woman who had made her statement in the same way. They had been found guilty of public indecency and sentenced to four months in jail, a verdict left unaltered by the suspended sentence.

Tunisia got enormous pressure from the European Union, France and Germany to let the women go. Those countries are major aid donors to the North African country. Germany said that Tunisia needed to change its laws regarding freedom of speech.

Uncharacteristically, the Femen members apologized for their half-nude protest and promised not to repeat it, drawing a condemnation from the Femen organization itself (which is based in Ukraine), saying that the three must have been put under severe duress. One member said she didn’t realize how shocking her act would be for the Tunisian public.

Tunisian Amina Tyler had protested by baring her breasts in the old Islamic center of Kairouan in May at a time when the Ansar al-Sharia radical terrorist group was forbidden from having its conference in that city. She is still in prison.

While it is true that public nudity contravenes community standards pretty severely in Tunisia, it is also true that the courts have been over reacting to dissent of various sorts. The Tunisian government recently sentenced rapper Weld15 to two years in prison for a music video he made attacking police brutality. He is appealing.

Femen members in Brussels protested the verdict against the Weld15 verdict by swarming the limousine of visiting Tunisian prime minister Ali Larayedh, who is from the ruling Ennahda or Renaissance Party (Muslim fundamentalist).

And, VICE reports on Femen as an organization: