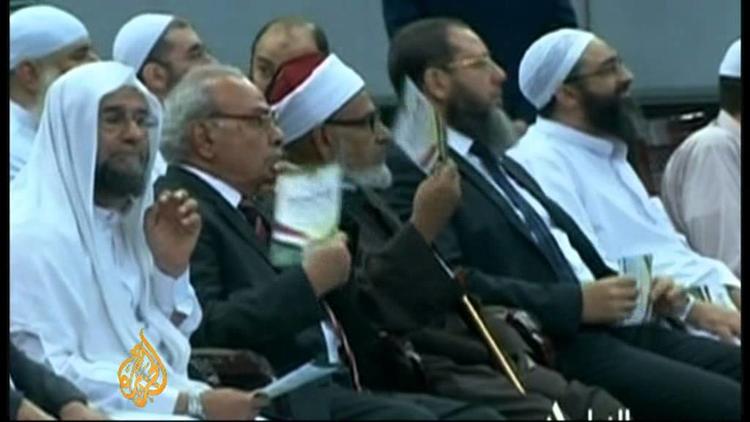 Egypt’s President, Muhammad Morsi, called Saturday for a no-fly zone over Syria authorized by the UN Security Council. At the same time, he cut off diplomatic relations with Syria.

It was the Arab League demand for a no-fly zone that led to the UNSC resolution on Libya and hence to the overthrow of the Gaddafi regime, and one question is whether Morsi’s change of position presages a new such campaign by the Arab League, which has already sided with Syria’s rebels.

Morsi’s step was intended to repair relations with the Muslim Brotherhood, from which he stems but which had been unhappy with his overtures to Iran and lack of firm position on Syria. (The Syrian Muslim Brotherhood, a separate branch, has been most upset at him).

It also plays to the movement of Sunni and Wahhabi clerics to call for jihad against the Syrian regime, especially now that Shiite Iran and the Shiite Hizbullah have become so central to the fighting against the mostly Sunni rebels. Egyptian Sunni clerics have downplayed the dangers of al-Qaeda-linked groups coming to the fore in northern Syria, seeing them as much less dangerous than Hizbullah. The growing Sunni clerical chorus against Hizbullah and Shiite Islam is an abandonment of the “taqrib” or rapprochement movement of earlier times, which sought Sunni-Shiite ecumenism. Many Sunni fundamentalists admired the 1979 Islamic revolution in Iran and the stance of Hizbullah against Israel in 2006. But now, in 2013, we are seeing the kind of anti-Shiite fatwas and calls for holy war by Sunni authorities that were typical of the 1500s, when Iran first turned Shiite under the Safavids and militarily challenged the Ottoman and other Sunni powers.

The sectarian polarization cannot be confined to Syria. The call by Muslim Brotherhood cleric Yusuf al-Qaradawi, based in Doha, for Sunnis to go fight Hizbullah in Syria has been blamed by Iraqi Shiites for the uptick in attacks on their community by Sunni guerrillas in Iraq.

Morsi’s speech is also intended to deflect attention from his domestic woes. He is under severe pressure from the Egyptian youth movement, the left, and the secular right. The youth movement has launched a “Rebellion” movement, a petition drive to gather 15 million signatures for Morsi to call early presidential elections, which will culminate in nationwide demonstrations against the president on June 30. In part, the objection is to his authoritarian ruling style, in part to his inability to improve the economy. Morsi’s attempt to establish an interim legislature by appointing members to the senate (Majlis al-Shura) has also been struck down by the courts, leaving him as singular leader without a firm separation of powers, and so hurting his legitimacy. Parliamentary elections may be held in the fall.