A report by the Times of Israel yesterday said religious opponents were reciting psalms, blowing the ram’s horn, and tearing garments over a new bill that would “significantly increase enlistment among Ultra-Orthodox Israelis” into Israel’s military or in national service.

Members of the Israeli parliament voted 64 to 21 in favor of the draft legislation, which must now pass through two more votes on the Knesset floor before becoming law. If passed, it would give the Ultra-Orthodox Jewish population (excepting a select group of 1800 students) a four-year transition period to serve in the IDF or in national service.

According to the Times, the Science and Technology Minister Yaakov Peri (Yesh Atid), who presented the proposed legislation before the Knesset, said, “It’s the end of the era in which we discriminate between secular Jewish blood and Haredi Jewish blood, while our enemies don’t make that distinction.”

Among Israeli Jews, the greatest and most widely resented exception to service in the Israeli military has been that of the Ultra-Orthodox (the Haredim). Under an agreement concluded in the early 1950s between Prime Minister David Ben Gurion and the Haredi Rabbinate, the young men of those communities would be exempt from universal conscription and the government would even provide their families with subsidies to enable them to study in Talmudic academies.

Originally this arrangement applied to only a few hundred young men. Fifty years later the unanticipated exponential growth of Haredi communities – demographers estimate about a third of last year’s Jewish babies were born into the Ultra-Orthodox community — means that tens of thousands of Haredi youth are exempted from military service every year. This has been seen by many as drain on the nation’s already burdened economy. 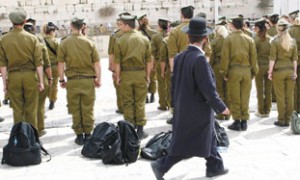 Resentment over these exemptions has been building, and that resentment has become a powerful political force in Israel. The recent rise of Yair Lapid and his party was fueled by these feelings. Because of this anti-Haredi backlash, the government got to work on legislation that would severely limit exemptions and force most Haredim to serve.

Some Haredim, in limited numbers, are already serving. A few years ago the IDF, in consultation with some of the more liberal Haredi Rabbis, started an army infantry unit specifically for Haredi youth. In this unit, known as Nahal Haredi, Ultra-Orthodox young men receive basic and advanced training while living in an atmosphere that allows them to keep to the letter of Orthodox law (e.g. strict Sabbath observance).

The Haredi response to these political developments has been severe, and over the past month this militancy has expressed itself quite violently, with Haredi men physically attacking soldiers and police officers on more than a few occasions, including one attack on a Haredi soldier.

Disturbing reports have also recently surfaced about a leaflet circulating in Orthodox Jewish neighborhoods that appears to call for the murder of Haredi soldiers, though it’s authenticity has been debated.

“In light of the wave of violence against Haredi soldiers there is a need for decisive and unequivocal action to prevent injuries and death,” said Reform rabbi and Hiddush director Uri Regev.

Prime Minister Binyamin Netanyahu joined a host of politicians, earlier this month, in condemning that attack against a Haredi soldier by dozens of Ultra-Orthodox men in Jerusalem’s Mea She’arim neighborhood.

“We will take a hard stand against those who attempt to strike fear in citizens fulfilling their duty to the state,” the prime minister vowed, adding that the numbers of Haredim who enlist in the army has “grown meaningfully in recent years.”

According to a recent NPR article, in 2007 slightly fewer than 300 Ultra-Orthodox Jews served in the IDF, and last year 1500 did.

It may come as a surprise to many that Jews aren’t the only religious group serving in Israel’s military. A report that significant numbers of Christian Arabs in the Galilee are enlisting in the Israeli army is one of the most confounding to come out of Israel this summer.

Christian Arabs (some 140,000 people: 10% of the Arab population) have recently volunteered for army service, encouraged both by senior military officers and by a Maronite Priest, Father Gabriel Naddaf. For his cooperation with the IDF, Father Naddaf has been roundly condemned by Arab members of Israel’s parliament. And he has been threatened with ex-communication by his archbishop.

As Elhanan Miller reported recently in the Times of Israel: We“Regardless of religion, for Israeli Arabs — who are exempted by law from military service — deciding to join the IDF is very much a taboo. But for the Christian minority within Arab society, shaken by the Arab Spring and its Islamist undercurrents, that reality is beginning to change, though most of the soldiers in active service remove their uniform before coming home on leave.”

Because of Father Naddaf’s efforts, close to a hundred Arab Christian men and women have enlisted in the army. It remains to be seen if those numbers will increase, and how their participation will impact the IDF. 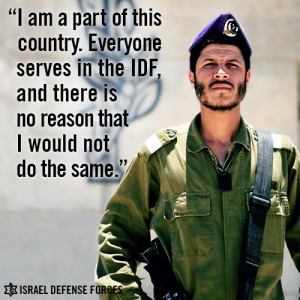 As a broad generalization, one could say that half of the 10.5 million people who live between the Mediterranean Sea and the Jordan River are loyal to the Israeli army; the other half either fear it or are deeply wary of it.

Most of Israel’s 5.5 million Jews respect and admire the army. For them, the Israeli army’s official name ‘the Israel Defense Forces’ reflects the concept that the army is the defender of the state; without it, the state would not have come into being — and without its military prowess, the state would long ago have ceased to exist.

The greater part of those who fear and resent the IDF (some 3.5 million Palestinians who are mostly Muslim) live in the West Bank and Gaza — areas that are under greater or lesser degrees of Israeli military control.

The great majority of the Arab ‘non-Jewish’ minority within Israel — approximately twenty percent of the state’s population of some seven million citizens — does not serve in the army — Israel’s most powerful and socially formative institution.

Agreements concluded in the first years of Israeli statehood exempted these citizens from serving in an army based on a system referred to as ‘universal conscription.’

According to Israel’s Defense Service Law all citizens are subject to enlistment in the IDF. Service is compulsory for both men (3 yrs.) and women (2 yrs.), and after military service, a large percentage of men and some women remain in the army reserves — with a month of active duty each year — for the subsequent two or three decades.

However, Arab citizens of Israel — most of whom are considered unfit for service — are exempt. Ultra-Orthodox Jews have also been exempt.

In contrast to the majority Jewish opinion, an admiring view of the IDF is generally not shared by the Israel’s Arab citizens – whatever their religious affiliation.

Most Israeli Arabs are Muslim (some 90%), some are Druze, and a diminishing number belong to Christian communities. Israel’s Arab citizens, descendants of those who did not leave Palestine during the 1948 War, are at best ambivalent about that army and its activities. While Israel’s Arabs do have a share in some of the state’s major institutions — there are Arab members of Parliament and Arab jurists on the nation’s High Court — they play no significant role in the army, the most powerful of those institutions.

(While exemption from military service may seem like an advantage, it can also be a barrier to advancement in the Israeli workforce, particularly in the managerial and technical sectors.)

Despite the exclusion of Israeli Arabs from the real corridors of power, some Arabs do enlist in the army. Among Muslims, some members of Bedouin tribes in the country’s southern Negev region serve in the army — many as trackers. And among the Druze in the north (pop. 150,000) there is a decades-old tradition of service in combat units. Druze, unlike other Israeli Arabs, are required to serve in the IDF.

Hundreds of Druze soldiers have died in military service, and in the northern Galilee there is even a memorial to them. Bedouins and Druze have been serving in the IDF since the establishment of the state in 1948.

Currently both the more powerful and the more marginalized communities within Israel are debating how to deal with participation in the military. Opposition within their respective communities to military conscription can be fierce.

But, as Israeli analysts note, ultimately these debates are more about community and political needs and less about what the army itself really needs.

Prominent political analyst Danny Rubinstein notes that the Israeli army of the future will require soldiers with considerable technical and other specialized skills. “We won’t be seeing conventional wars, fought on battle fields with many troops,” says Rubinstein. “Thus the IDF is less interested in enlisting new recruits and more interested in recruiting professional soldiers who can serve in a high-tech army.”

Because it’s a national army there’s been a move to include many different constituencies, in order to achieve as much social cohesion as one can hope for in this fragmented society.

Of course in a country where the loyalty of 20% of the citizenry is suspect – this seems a utopian idea.

While the Israeli army, like all national armies, aspires to be a unifying force — some have said “a people’s army” — these wranglings over military service are divisive, and they indicate some of the deep fissures in the greater Israeli social fabric.

Shalom Goldman is Professor of Religion and Middle Eastern Studies at Duke University, and core faculty of the Duke Islamic Studies Center. His most recent book is Zeal for Zion: Christians, Jews, and the Idea of the Promised Land (UNC Press, January, 2010). Goldman has just returned from a month-long research sojourn in Israel.