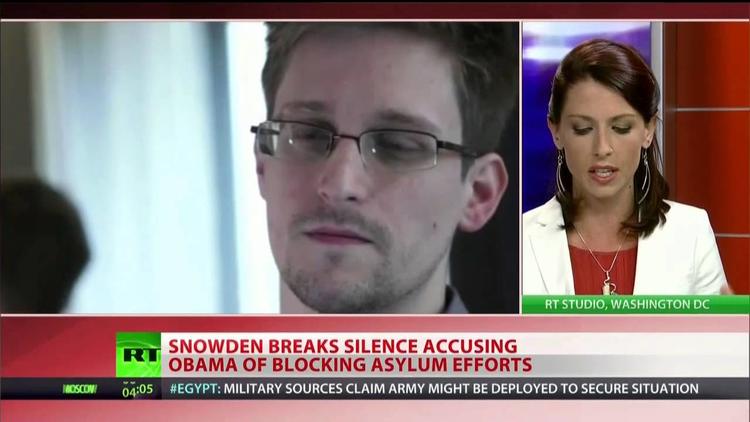 Edward Snowden released a statement from Moscow on Monday, slamming Barack Obama for revoking his passport and rendering him stateless and unable to seek asylum even though Snowden has not been found guilty of any crime. (The US denies that revoking a passport is the same as deprivation of citizenship, but in this case it is hard to see the difference. The full statement is below. Snowden has applied for asylum to 15 countries.

In other news, Ecuadoran president Rafael Correa has said that Snowden cannot apply for asylum to that country unless he is already on Ecuadoran soil (thus underscoring Snowden’s point that depriving him of a passport is a means of keeping him from having the right to seek asylum.) Russia’s Vladimir Putin said that Snowden would only be granted asylum in the Russian Federation if he ceases leaking US secrets and “harming our American partner.”

Russian media may not be very free, but Russia Today reports on and discusses Snowden’s statement in a way that muzzled US media will not:

And here is the statement:

“Statement from Edward Snowden in Moscow

One week ago I left Hong Kong after it became clear that my freedom and safety were under threat for revealing the truth. My continued liberty has been owed to the efforts of friends new and old, family, and others who I have never met and probably never will. I trusted them with my life and they returned that trust with a faith in me for which I will always be thankful.

On Thursday, President Obama declared before the world that he would not permit any diplomatic “wheeling and dealing” over my case. Yet now it is being reported that after promising not to do so, the President ordered his Vice President to pressure the leaders of nations from which I have requested protection to deny my asylum petitions.

This kind of deception from a world leader is not justice, and neither is the extralegal penalty of exile. These are the old, bad tools of political aggression. Their purpose is to frighten, not me, but those who would come after me.

For decades the United States of America have been one of the strongest defenders of the human right to seek asylum. Sadly, this right, laid out and voted for by the U.S. in Article 14 of the Universal Declaration of Human Rights, is now being rejected by the current government of my country. The Obama administration has now adopted the strategy of using citizenship as a weapon. Although I am convicted of nothing, it has unilaterally revoked my passport, leaving me a stateless person. Without any judicial order, the administration now seeks to stop me exercising a basic right. A right that belongs to everybody. The right to seek asylum.

I am unbowed in my convictions and impressed at the efforts taken by so many.