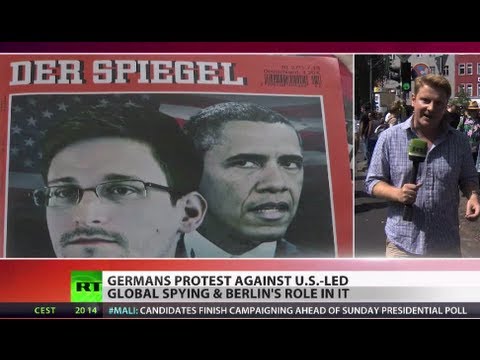 A few thousand people came out to demonstrate in 40 cities Germany on Saturday against US National Security Agency spying and German government complicity with it. They hailed from the Green Party, the Pirate Party, and organizations like “Stop Watching Us!” The biggest demo was in Frankfurt, the financial capital.

German Chancellor Angela Merkel (center-right) has been worried that the surveillance scandal will hurt her in the upcoming elections. So far the socialists and greens have not been able to gain too much traction on this issue, but given the depth of feeling in Germany against anything that smacks of totalitarianism, given the country’s modern history, it is not impossible that it could yet emerge as a campaign issue.

NSA leaker Edward Snowden revealed close cooperation between the German BND intelligence organization and the NSA, which he says is structured to allow politicians deniability. And, indeed, German intelligence officials have asserted with a straight face that the NSA is not monitoring the German public. Yes, and there is this bridge over the Rhine that he can let you have for a song.

Der Spiegel revealed, based on the Edward Snowden leaks, that half a billion data connections in Germany are monitored each month by the Tempora program, jointly operated by the British GCHQ and the American National Security Agency. (The press seems determined to call it PRISM, but that is actually a different operation; see no. 4 here ).