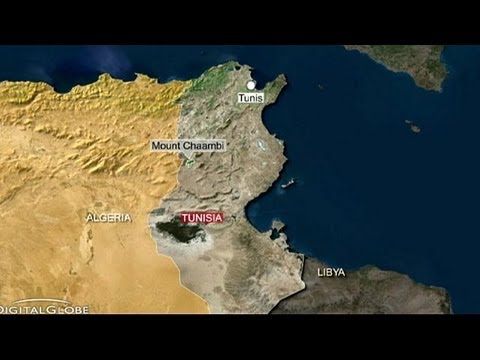 After days of demonstrations and turmoil, Prime Minister Ali Larayedh addressed the public in Tunisia on Monday. Despite calls that he resign in favor of a national unity government, he insisted that he will remain in office, and apparently there will be no major cabinet shuffle. He did make a concession in guaranteeing that new elections for a regular parliament will be held on December 17. That is the third anniversary of the self-immolation of Mohamed Bouazizi touched off the Tunisian and other Arab revolutions.

Also on Monday, Tunisian troops tracking Muslim extremists near the Algerian border got into a firefight with them and 9 troops were killed. For a small country such as Tunisia, it is a very high death toll, and Tunisians are upset because they are not used to this sort of thing.

The assassination of the leftist founder of the Popular Front, Mohamed Brahmi, last week, touched off several days of turmoil and provoked demands that the government resign. Over 50 of the 217 members of the transitional parliament have suspended their activities in protest, and on Monday the Education Minister resigned. Critics of the government complain that since it is dominated by devotees of political Islam, it is not sufficiently vigorous in fighting terrorism issuing from the Muslim religious right.

Critics have complained that the current Constituent Assembly was only elected for one year, on Oct. 23, 2011, and that it should have drafted a new constitution and moved to new elections a full year ago. When I was in Tunisia in early April, some youth maintained to me that the parliamentarians would keep delaying new elections because they liked their salaries and connections and were trying for bigger pensions. Many secular Tunisians, and those committed to human rights, also fear that the draft constitution that will be reported out within a few weeks will contain repressive articles, because of the undue influence of the religious right, of which Renaissance forms part.

Larayedh took a hard line on the anti-government demonstrations by 4 or 5 thousand people in Bardo in front of the parliament building in Tunis. He implied that if mob rule were the way his opponents wanted to go, his Muslim fundamentalist Renaissance (Ennahda) Party could put really big masses in the streets. He said he had not gone that route out of a desire to avoid public tumult. He also attacked the deputies of the Democratic Forum for Labor and Liberties (Ettakattul) of Mostapha Ben Jafar for threatening to withdraw from the ruling coalition, saying that they were being opportunistic.

The Forum only has 20 seats out of 217, whereas President Moncef Marzouki’s Congress for the Republic has 29 and the Renaissance Party has 89. Since President Marzouki is sticking with his partnership with Renaissance, Larayedh would actually still have 118 seats, a slim majority, even without the Forum, and besides, finding 20 seats among small parties and independents to replace the Forum would not be that difficult. The Forum leader Mostapha Ben Jafar, would just lose his position as speaker of the Parliament if his party withdrew.

The Renaissance Party’s determination to tough it out and finish out the planned transition normally is made possible by its overwhelming position in parliament, its powerful grassroots organization, and the weakness and smallness of the Tunisian military. Also, that Tunisia has a secular president committed to continuing his coalition with the religious-right Renaissance Party also helps.