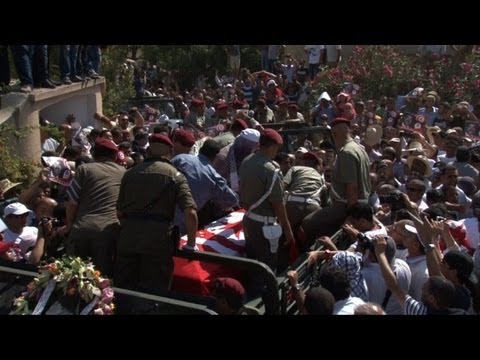 An estimated 50,000 came out in Tunis for the funeral of the assassinated leftist opposition member of parliament Mohamed Brahmi, leader of the pro-worker Popular Front. [Estimate here). Brahmi was shot 14 times outside his home on Thursday by an unknown assailant. A major suspect is extremist Boubakr al-Hakim, a former recruiter of fighters for Iraq, who fought against US troops there himself.

In the small town of Sidi Bouzid in the center of the country, protesters clashed with police, who deployed tear gas to disperse them. On Friday, the small town’s residents had torched the Renaissance Party headquarters and announced that they were seceding from the government.

In the industrial city of Sfax, the Popular Front mounted a march in Brahmi’s honor, and some pitched tents in the downtown. They demanded the dissolution of parliament and the formation of a national unity government.

In some provinces demands were launched that the Renaissance Party governor be dismissed.

The assassination has caused public outcry because many Tunisians believe that the transitional government has not been vigilant about curbing Muslim extremism. The fundamentalist Renaissance Party (Ennahda) has the office of Prime Minister and several other key cabinet posts, including the Interior Ministry (think: FBI). Many leftist and secular Tunisians believe that Prime Minister Ali Larayedh has been soft on the extremists because he does not want to alienate the right wing of his own party.

The Renaissance Party is likely going to have to share more cabinet posts with other parties and accept a reduction in its own power. Speaker of Parliament Moustapha Ben Jaafar pleaded with the 52 opposition parliamentarians who suspended their activities in the legislature to cease their withdrawal. He pledged that the draft of the new constitution would be completed shortly and that the constituent assembly (temporary legislature/ constitution drafting body) would end its term on October 23, 2013, two years after it was elected. (The next step is elections for a regular parliament).