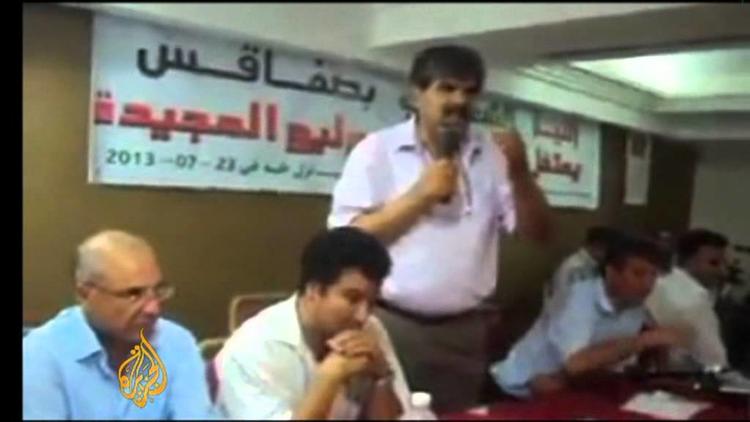 The assassination Thursday of opposition member of parliament Mohamed Brahmi (from the small far left Popular Front coalition) shook the country for the second time this year, following on a similar killing in February of another Popular Front figure, Chokri Belaid. Thousands demonstrated throughout the country against the ruling Renaissance (Ennahda or al-Nahda) Party, a party of the religious Right, calling for it to step down since it had been unable to provide security, or had been unwilling to to crack down hard enough on hard line Muslim Salafis.

The powerful nation-wide General Union of Tunisian Workers (UGGT) is calling for a general strike on Friday. Tunisair cancelled all flights, learning that its workers would honor the general strike. Three members of the elected parliament resigned in protest. Some 100 members of the Tunisian Republican Party (the core of which is the old Progressive Democratic Party) resigned and many said they wanted the parliament dissolved.

Brahmi represented Sidi Bouzid, the small town in the center of the country were the Tunisian Revolution was launched in late 2010 by the self-immolation of Mohamed Bouazizi. Sidi Bouzid erupted in anger, and a crowd invaded the Renaissance Party HQ and set it on fire. Renaissance/ Ennahda officers were also attacked elsewhere in the country, though most often police used heavy tear gas to disperse the crowds before they could attack the buildings.

A terrorist cell in Tunis is targeting Popular Front leftists, likely in an attempt to silence them and to push the country in the direction of al-Qaeda, on the model of parts of northern Syria and north-central Iraq. The government maintains that it is criminal elements loosely linked to extremist Muslim groups that were behind the assassination of Belaid in February. Secular and leftist critics of the fundamentalist government accuse it of coddling the hard line Salafis and of declining to confront al-Qaeda offshoots such as Ansar al-Sharia.

Renaissance Party leaders must be extremely anxious. Although they have the legitimacy of having been elected and of gaining a plurality of Parliament on October 23, 2011, they are aware that the Egyptian masses came out against Muslim Brotherhood President Muhammad Morsi, giving the military there the pretext to intervene and detain him. The Tunisian military is small and weak, but a massive popular uprising could force their hand. Tunisian youth have formed a Rebellion or Tamarrud movement on the model of the one in Egypt, which aims at dissolving the government, proroguing parliament, and going to new elections now rather than waiting until the end of the year.

Renaissance Party leader Rashid Ghanoushi warned against any such move, asserting “we are not in a position of weakness.”

Secular oppositionists have argued that some Renaissance officials have in recent weeks said inflammatory things against secularists, and blamed them indirectly for the assassination.

After Belaid’s killing in February, the Renaissance Party refused to make any concessions. Then Prime Minister Hamadi Jebali had wanted to fire most of his cabinet and to institute a government of national unity. When the party declined, Jebali had no choice but to resign. He was replaced by his Interior Minister, Ali Larayedh.