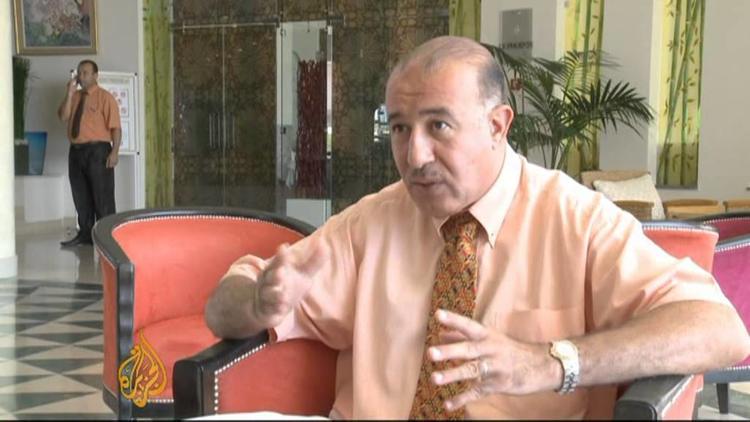 Since the assassination of leftist leader Mohamed Brahmi of the Popular Front on July 25, Tunisia has been thrown into a new round of political turmoil. Thousands have gone to the streets to demonstrate against the center-right, religiously inflected government Ali Larayedh for not cracking down hard enough on Muslim extremists. The left and the liberals have made a range of demands, from dissolution of the elected National Constituent Assembly (NCA) to the formation of a government of technocrats. The maximal demand is the resignation of Larayedh of the ruling Renaissance Party (Ennahda) along with the dissolution of the parliament, followed by early new elections. Renaissance leaders say that the assembly in just about finished with the constitution, which they say will be in place by October 23, and that they will hold new elections in December.

The left-liberal youth have gathered in their thousands in front of the parliament building in Tunis, but also in other cities, to protest a government they see as fundamentalist and soft on terrorism. They have been joined by the General Union of Tunisan Workers (UGTT), which has given the government a two-week deadline to resolve the problems with its opposition. The UGTT mounted a successful national strike on Friday, and there were big anti-government demonstrations throughout the country.

The ruling Renaissance Party’s head, Rashid Ghanoushi, said Saturday that the Constituent Assembly is a red line, since it was fairly elected and is the repository of legitimacy. He has also backed Larayedh in remaining at the head of the government, though apparently a Larayedh cabinet full of technocrats or members of other parties (a government of national unity) might be considered by the Renaissance Party. I saw Ghanoushi on t.v. saying that you have to enter a house through its doors, and if you want to get rid of the Renaissance government, that is permitted, but you have to do it via the ballot box.

On Saturday evening, the Renaissance Party played its trump card, calling the faithful to a huge counter-demonstration at the Casbah in the capital. The message was that those who think they can demonstrate the government out of office have a another think coming, since Renaissance / Ennahda can bring out crowds just as big as those of the protesters.

To set these events in context is these reports from the Tunisian press, translated by the USG Open Source Center:

The following lists exclusive reports selected from Tunisian Arabic sources on 2 August that are relevant to the following topics: the Muslim Brotherhood’s alleged involvement in the current security situation of Tunisia; the arrest of four “terrorists” on Mount Chaambi as clashes continue between the army and “extremists”; the Ennahdha Movement and Algerian Foreign Ministry’s reactions to the Tunisian media’s coverage of recent events that suggest that Algeria is “directly involved” in Tunisia’s security situation; the meeting of the head of Tunisia’s General Labor Union, UGTT, with Ennahdha Movement leader Rached Ghannouchi; and other issues.

Al-Shahid in Arabic: carries a report saying that according to a “reliable source,” Houssine Abassi, secretary general of the Tunisian General Union Labor, UGTT, told Ennahdha Movement leader Rached Ghannouchi during a meeting the day before that the government has “one week to reach a consensus about forming a competencies government” or the UGTT will be required to look for “other alternatives.” The report adds that the UGTT is trying to play the role of the “mediator” between the ruling Troika and the opposition, which calls for the dissolution of the NCA and the government.

Tunis Al-Sahafah Online in Arabic — Website of daily founded in 1989; sister paper to the French daily La Presse; critical of the government and Islamists; URL: http://www.essahafa.info.tn —

carries a report saying that deputies of the majority coalition and those who support the NCA [National Constituent Assembly]’s “legitimacy” held a general consultancy session to discuss ways in which the NCA will be carrying its works in the coming phase. The report adds that the deputies reached an agreement on a set of points, including the formation of a committee representing the various blocs and who will address NCA speaker Mustapha Ben Jaafar with the demands that are approved by the majority coalition. These demands, adds the report, include the “committee’s willingness to complete the process of democratic transition, its adherence to the NCA’s full powers, its abidance by a clear agenda for the ratification of the constitution, and setting a date for the elections.” The report also says that the deputies called for holding a plenary session on 5 August, as well as “building bridges of dialogue” with the former deputies. The report also adds that some deputies have criticized some media outlets for “calling for war” and “inciting (for protests) in public places.”

Hour News in Arabic — News website founded 15 November 2011 on eve of Tunisian revolution; claims to be independent but appears to be sympathetic to Islamist Ennahdha Party; URL: http://www.hour-news.net/ —

carries a report saying that Ennahdha Movement leader Rached Ghannouchi has reiterated his support for keeping Ali Larayedh as prime minister, and this came during a meeting he held with interim President Moncef Marzouki to study the current political situation of the country. The report adds that Ghannouchi affirmed the Ennahdha Movement’s “readiness to reach new consensus about the government,” adding that he considered the National Constituent Assembly a “red line” that should not be compromised.

carries a report saying that the security forces arrested an “extremist” in Bizerte Governorate on 1 August as “he was preparing to create a homemade landmine when it exploded on his hand.” The report cites a posting on the Facebook page of the Interior Ministry as saying that the element is arrested and that investigations are ongoing.

And in the crackpot conspiracy theory section:

Tunis Al-Shuruq Online in Arabic — Website of privately-owned, independent daily described by key regional and international media as having the widest circulation in Tunisia; founded in 1984, the paper is generally critical of Islamists and the policies of the Ennahdha-led government; URL: http://www.alchourouk.com —

carries a report saying that “reliable sources” have confirmed that what is happening in Tunisia is an “important part of the global plan of the international organization the Muslim Brotherhood (MB)” and that the series of assassinations and events in Tunisia constitute “the implementation of the resolutions of the emergency meeting held in Istanbul in July with the presence of the US and Israeli intelligence services.” The report adds that the plan of the MB is to weaken the army and security apparatuses in order to “make room for extremist groups to control Tunisian society,” noting that former Chief of Staff Rachid Ammar has warned of this plan. The report concludes: “According to information obtained by Al-Shuruq, the international organization of the MB and the parties that fall under its banner want to impose a particular lifestyle on Tunisian society, similar to that of Somalia and Afghanistan, with clear US and Zionist support.”

Tunis Al-Shuruq Online in Arabic A carries a report saying that an army unit arrested four “armed elements” on Mount Chaambi the day before during sweeping operations being carried out by the National Armed Forces on the mountains in Kasserine and Le Kef Governorates. It adds: “We could not find out the names and affiliations of these elements due to the media blackout on what is happening on Mount Chaambi.” Citing a security source, the report says that the army found a military uniform on Mount Chaambi, adding that the same source denied news of the arrest of a forest guard in possession of military uniforms. The report adds that the Algerian Gendarmerie Forces have reinforced security measures on the border with Tunisia in anticipation of “terrorists” entering their country. :

Meanwhile, Tunisia’s economy is growing at only 2.5 percent this year and tourism is way off.