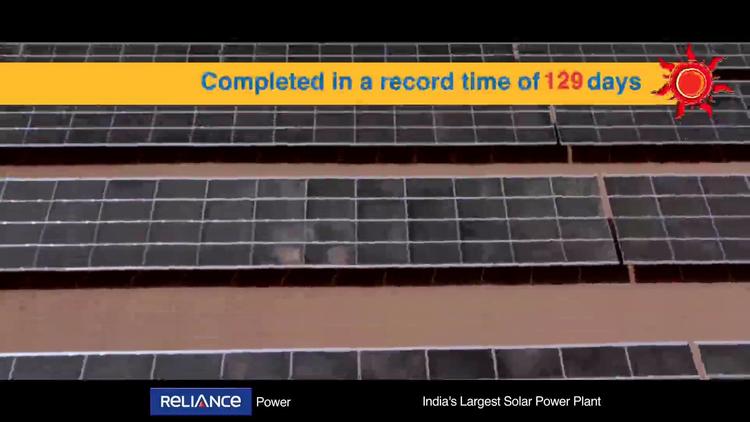 Climate change produced by human burning of fossil fuels is a dire challenge to life as we know it on earth, and it will likely raise sea level 3-4 feet in this century, wiping out Miami and New Orleans and displacing large numbers of people in Indian Bengal, Egypt and Bangladesh. Moreover, Human beings may grow to as many as 11 billion by 2050, producing severe demand for more electricity. Only solar power can truly resolve these problems, since so much solar power reaches the earth that if it could be harnessed it would meet energy needs many times over. Solar would largely stop C02 emissions. In many markets, solar photovoltaic cells can compete with coal and natural gas. People are voting with their feet, away from a sweltering, storm-ridden and risky warming world and toward a renewable future implemented in a couple of decades at most. Herewith some solar power good news stories from around the world:

This film captures the marking of India’s largest Solar PV Plant in Dhursar, Rajasthan., with an initial 40 megawatts.

Rajasthan has several advantages for this project. It is desert-like and so has plenty of room for solar panels and plenty of sunlight to fuel them. There is a lake nearby with water that can be used to wash dust off the panels. The 57,000 acres for the plant has already been purchased. And since the project was broached, the cost of the panels has fallen in half, making Reliance all the more eager to pursue it.

2. Turkey: A joint Chinese-Turkish project will begin with construction of a solar plant that will generate 100 megawatts. Turkish government policy, including feed-in tariffs, has turned positive for solar energy.

3. Ethiopia is investing in solar to power some 25,000 homes with electricity. Ethiopia has been considering damming the Nile for hydroelectric, but could achieve much more energy with wind and solar installations and then wouldn’t have to mess with the water supply for Sudan and Egypt.

4. Post-Fukushima Japan now has 10 gigawatts of photovoltaic solar generating capacity. Japan is only the fifth country to pass this threshold and has done it very quickly (though note that China will put in 10 gigawatts of new solar capacity this year alone). Import of Liquefied Natural Gas to replace the electricity generated by the 6 1-gigawatt nuclear plants at Fukushima has pushed Japan’s balance of trade deficit to heights unknown in recent years. Government policy to favor wind, solar, geothermal and wave power could save Japan an enormous amount of money in coming years (it isn’t the first instinct of the present conservative government). Japan’s government has approved a further 21 gigawatts in new solar generating facilities.

5. Of the ten largest solar plants operating today, 5 are in the US, two in Germany, two in Spain and one in China. But that distribution is likely to change, with China becoming preeminent in coming years. Spain’s scandal-ridden conservative government seems intent on sabotaging solar energy, and you have to wonder if they’re taking personal bribes to do it.

6. Boulder, Colorado seems to be moving ahead with a municipalization of its energy utility. Former provider Xcel gets 60% of its energy from dirty coal, and it wouldn’t commit to reducing that amount substantially until 2028. If energy utlities don’t meet the demand for green energy, people will just create their own utlities. Increasingly, with solar and wind, cities could essentially go off the grid.

7. A 75 megawatt solar farm has gone live in South Africa, a first step toward the country’s current commitment to install 4 gigawatts of solar electricity generating capacity.

8. Germany generated a record-breaking 5.1 terawatt hours of energy from solar panels in July, leaving the US in the dust.

9. Solar panels are generating fully 7% of Italy’s electricity this year.

10. Kedah in Malaysia not only has two big factories for producing solar panels but the local government intends to consume some of them locally. Kedah is among the most sunlight-drenched areas of Malaysia, and Kedah wants to put solar panels on government buildings and make a push for this form of energy in that area.