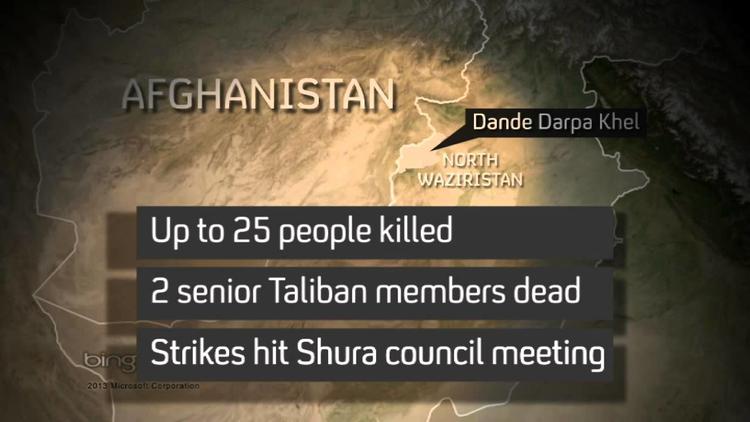 The CIA drone strike in North Waziristan yesterday killed 25 persons and targeted a high-level meeting of the Pakistani Taliban (Tehrik-i Taliban Pakistan or TTP). It finally killed TTP leader Hakimu’llah Mahsoud of the large and important Mahsoud tribe in the Federally Administered Tribal Area (FATA) of northern Pakistan. Mahsoud’s death by drone has been repeatedly announced in the past but it was confirmed by the TTP this time. FATA is roughly analogous to US Native American reservations, and is not firmly under the control of the central government.

The deadly attack comes only weeks after Mahsoud said in an interview that he was ready for peace talks with newly elected Pakistani prime minister Nawaz Sharif, over the objections of TTP hard liners. It also came after Sharif met in Washington with President Barack Obama, asking for an end to drone strikes and receiving from Obama a pledge to review the policy.

This context for the drone strike has to raise the question of whether John Brennan, head of the CIA, is deliberately attempting to forestall Pakistan-TTP peace talks and is determined to prevent Nawaz Sharif and Obama from cementing a strong relationship. Pakistani officials are talking about a ‘sabotaging’ of the talks. But they are resisting calls in the press for Pakistan to punish the US by halting NATO shipments of military equipment and other supplies from Karachi up to the Khyber Pass and thence into Afghanistan.

The TTP will certainly launch reprisals inside Pakistan and against US troops and the Afghanistan National Army on the Afghanistan side of the border. The Pakistani public is bracing itself for attacks.

“If the report is true and Hakimullah Mehsud has been killed, the dialogue process, which has not formally begun, will get affected //negatively//. The Taliban were already stating that some //drama// was being staged with them in the name of talks, and now their stance will get strengthened. There were three to four groups within TTP that were opposing the talks since day one, and now their stance will become strong. However, it is a matter to ponder upon that earlier Waliur Rehman, who was in favor of talks, was killed, and now Hakimullah Mehsud, who too wanted to hold talks with the government, has been killed. A question arises why the Taliban groups or the commanders who are not in favor of talks have not been targeted so far, and their stance will further get strengthened. Hakimullah Mehsud was already wanted to have talks. As for the //deadlock// for some days, Hakimullah Mehsud had sent a hand written piece of paper to the government representatives through his messenger wherein he had expressed his willingness for talks. The two sides had also agreed on names for talks, but later attempts were made to include some people in the negotiating team about whom Hakimullah Mehsud had objections, and that was why, there was deadlock. The government, however, was continuing its efforts to start the dialogue process. And as now the process was about to begin, Hakimullah Mehsud has been attacked. If the report of his killing is correct, the process will get jolted. The TTP groups that have been continuing their attacks and oppose talks will have justification to continue their activities.

(Memon) Mir, we would like to inform you and the viewers that Interior Minister Chaudhry Nisar Ali Khan has denied to confirm the report. Only a foreign news agency is claiming about the killing of Hakimullah Mehsud. As you have told us that the local people as well as the local reporters have also not yet confirmed that TTP Chief Hakimullah Mehsud has been killed in the attack.

(Anchor Mansoor Ali Khan) Prime Minister Nawaz Sharif has paid a visit to the United States, and after that, two drone strikes have been carried out. What is the position of Pakistan now?

(Mir) … Tariq Fatemi, special assistance to the prime minister on foreign affairs, who was also present in the prime ministera’s meeting with President Obama had confidently stated a few days ago that Obama had assured Nawaz Sharif that the United States would //review// its policy of drone strikes. But this has not happened, and two consecutive strikes have taken place. This would certainly increase political worries for Nawaz Sharif. I am telling you that there were three to four strong groups within TTP that were not in favor of talks since day one, and Hakimullah Mehsud had been continuously persuading them for talks. You would have noticed that Hakimullah Mehsud had developed some flexibility in his stance for some days. However, the two sides were not reaching agreement on the names of the negotiating team for talks because some state institutions had tried to include some people of their own liking on whom Mehsud had objections. Despite that, Chaudhry Nisar Ali Khan was striving for beginning of the talks. The process had not yet begun, but efforts had been underway for a //structured dialogue//. Now the person who will have to face embarrassment the most is the prime minister.