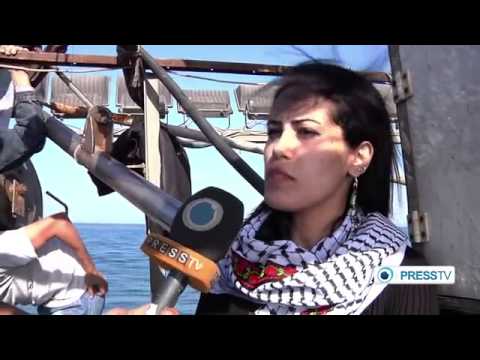 About 200 Palestinian youth ctivists briefly broke the Israeli blockade on fishing off Gaza past an arbitrary 6-mile limit on Monday.

“”We want to show the world that there are people under occupation who are being starved in Gaza while the world is watching,” Ishraq Mahmoud, spokeswoman of the Palestinian Uprising Youth Coalition, which organized the event, told a press conference before embarking.”

Israel does not own the ocean and has destroyed the Palestinian fishing industry, which once employed thousands of people. It is in profound violation of its international obligations as the occupying power in Gaza. It is not supposed to engage in collective punishment or to alter the life ways of the occupied population.

“Gaza fishermen complain that the measure has negatively affected their business, saying their annual haul of fish has since fallen from pre-blockade levels of some 4,000 tons to a current 1,500 tons. Of the Gaza Strip’s almost two million inhabitants, some 40,000 earn their living through fishing, according to the Palestinian Fishermen’s Union.”

That’s the “easing” of the blockade that Israeli government spokesmen speak of to the world.

In fact, Israeli refusal to allow delivery of inexpensive fuel (they’re letting the pricey premium stuff through) has cause water purification plants to fail, flooding the streets with sewage, through which children have to wade to get to school.

The fact is that the Palestinians in Gaza desperately need the 2,500 tons of fish a year that the Israelis are deliberately preventing them from catching.

I wrote last year this time:

“The food blockade had real effects. About ten percent of Palestinian children in Gaza under 5 have had their growth stunted by malnutrition.

A UN Report out last month predicts that if Israel does not change its policies toward Gaza, the strip will be uninhabitable by 2020, when the population will likely be 2.1 million (think Houston). The deterioration of the water, and the sharp downward mobility of the Palestinians, are only some of the problems the territory will face.”

Israel must end this unconscionable blockade of Palestinian civilians (half of whom are children) immediately.

PressTV reports on the youth protest off the coast of Gaza